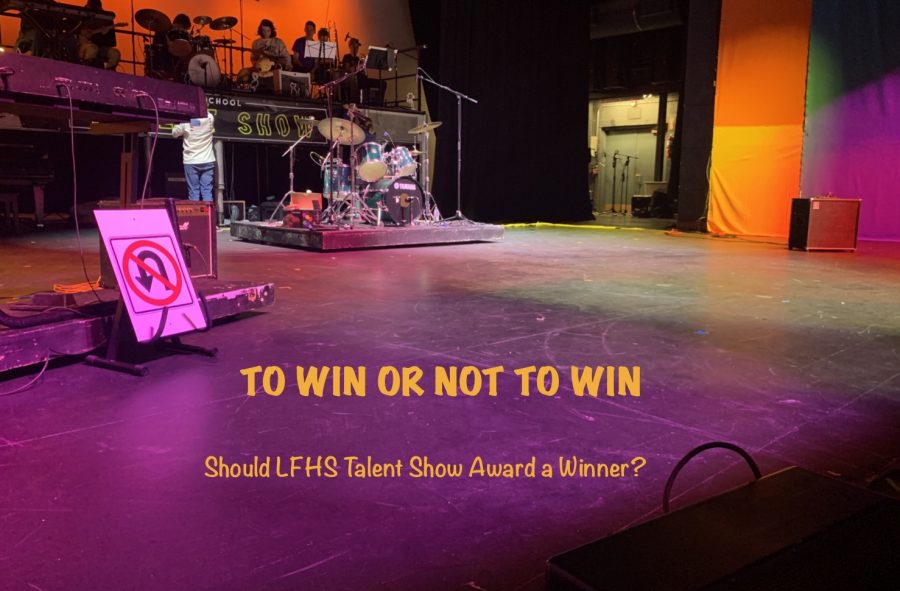 The stage is set for this weekend’s three-night run of talent, but should there be a slight change to the format?

Should Talent Show Award a Winner?

Some schools do it, LFHS does not. Two of our Opinion Editors take sides.

Every year, hundreds of students and community members attend the much-talked-about LFHS Talent Show. Many different acts from all different grades partake in Talent Show to show off what they’ve got. While Talent Show does bring the community and high school together, the students participating do not receive any prize or even compete to have a winner.

I believe the LFHS Talent Show should have categorical winners.

With this proposal, contestants could be split into categories, for example, duets, solos, bands, and maybe an “other” category. They would then have a winner of each of those categories.

The students who participate in Talent Show participate for their own desire: showing off their talent, speaking their voice, or using the stage to practice for the real world. I believe, if there would be a winner or prize of the Talent Show, students who are less motivated (due to any reason) to participate would have more willingness to be in the talent show.

There are many students that enjoy some healthy competition. Some students even perform better under competition. I am not asking for some huge prize, but name recognition within our school, newspaper articles, gift cards to local restaurants or shops, could all add a little extra “umph” to the talent show environment.

Having categorical winners could also open up Talent Show more to the community.

The majority of the supporters of Talent Show are students and staff of LFHS and family members of the students in the acts. The categorical winners could be picked by the public. Determined by a panel of Lake Forest and Lake Bluff community members who act as “judges” instead of the audience who are majority students at LFHS, this would deter the idea of having the “most popular” act winning the talent show and increase the act’s chances based on pure talent – how it is supposed to be.

While some would argue that comparing acts at the LFHS Talent Show is similar to comparing apples to oranges, the categories would make sure that alike acts would only be competing against their own kind. There is the Battle of the Bands coming up on April 9, where bands do compete for a winner but, it is hosted by CROYA, not the high school. The Battle of the Bands, just like the talent show, practices good sportsmanship and has bands that come back every year to participate in the battle, even when they haven’t won in the past.

Talent Show with a little healthy competition would be just like that. Fun, exciting, and entertaining to watch for the Lake Forest and Lake Bluff communities. 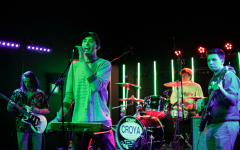 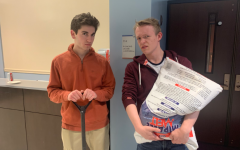 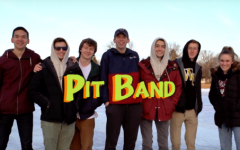 Declaring Talent Show winners would only ensure that nobody won. There must be no such thing.

Firstly we must empathize with the performers. Performing in front of a large audience is immensely stressful as is. Perhaps I shouldn’t talk as I will be reviewing the Talent Show for The Forest Scout, but there it is: reviews aren’t exactly helpful as they are liable to be rather critical, but giving out prizes is like blowing up an oil tanker on the Great Barrier Reef.

If we divided the performers into some number of arbitrary groups and told them “by the way, you will be judged on how ‘good’ you are in the eyes of a handful of subjective judges,” we would only succeed in adding more stress to the situation. Competition can sometimes be a good motivator (at least I hope so — otherwise our entire economic system is based on a lie) but in the case of a talent show where we are being treated to an array of already stellar performances, I don’t see the need to demand more production value. Hundreds of human-hours have been sunk into this thing; how, exactly, would prizes enhance our appreciation for this tremendous sacrifice of time and energy?

The idea of any prize — general or categorical, it matters not — is also fundamentally illogical because of the subjectivity inherent in awards. I happen to despise rap music; does that make rap music bad? The fact that rap songs have won numerous awards provides a categorical response: no.

Our fellow students are rising up to perform, to bring joy into our hearts, to become better at what they love. That is what we should honor, not their skill or their success.”

There is no point to subjective awards of any kind. What we like best varies from person to person, and that is something to be celebrated. Declaring that one point of view is simply “more correct” is illogical and insensitive towards those with differing opinions. Since none of this will be significant, since all of this will be forgotten — there is no reason we should sacrifice consensus to declare a single winner or group of winners.

Prizes and awards have a purpose — in sailing regattas or track meets, for instance, or in subjective areas where recognition is desperately needed (eg, world peace). Nobody can argue that Mahatma Gandhi did not deserve the Nobel Peace Prize; unfortunately, he never received the Nobel Peace Prize, a blight on the Nobel Prizes that serves as Exhibit A for the dangers of placing value on subjective awards.

But so many prizes and awards are also fundamentally immature and unworthy of a species that has split the atom and landed on the moon and wrought great works of art. At the end of the day they are things we pin to ourselves in the hope of attracting a mate, or a college, or a good job, or a Wikipedia entry. Too often they are but lowly recognitions of base achievements that have no bearing on our fundamental value as living beings. They focus on what we did and not why we did it, creating an endless cycle of competition that satiates only our greed for recognition.

Rosa Parks, Elanor Roosevelt, Martin Luther King Jr, the Dalai Lama — these people are heroes who deserve to be recognized not for what they did but for why they did it. They killed monsters because it was the right thing to do; all else followed.

The Talent Show is, in its noblest form, essentially the same. Our fellow students are rising up to perform, to bring joy into our hearts, to become better at what they love. That is what we should honor, not their skill or their success.

And the only way to honor that is by packing the stands and drowning the stage in cheers.