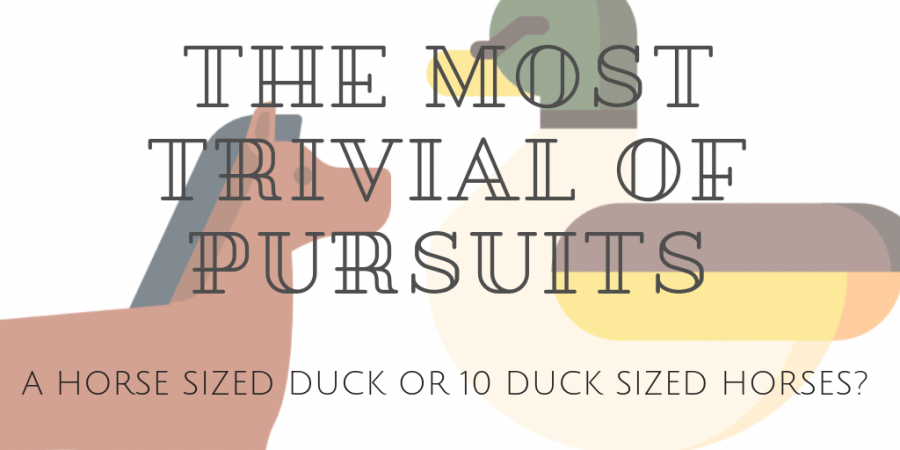 The Most Trivial of Pursuits 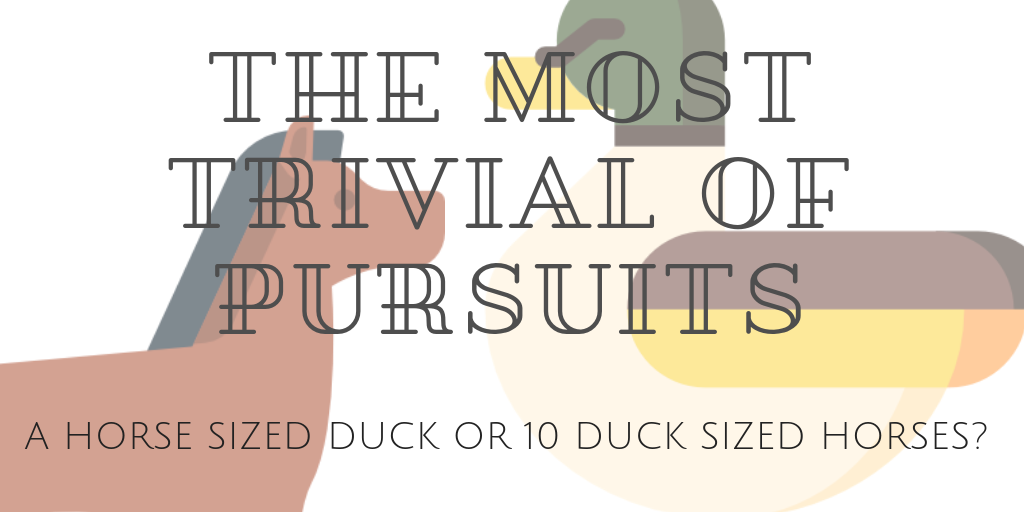 The Most Trivial of Pursuits

Each week The Forest Scout will take on one of the dumbest debates in pop culture. You’ll likely be dumber for reading. You’re welcome.

The 10 duck-sized horses win, no doubt, through the magic of physics.  Questioning the existence of duck-sized horses? Just because they may or may not exist, does not mean that they won’t totally destroy some big duck.

Take a moment to identify a few key facts before I definitively prove the victory of the horses.  First, realize that a) horses have extremely strong kicks, the average is around 2000 psi, b) the average horse hoof diameter is about 4 inches across, and c) I’m assuming that a horse hoof is a circle to make the math easier.

By multiplying the pressure of 2000 psi by the area of the hoof, we get a force of 50265.5 pounds of force.  That on its own is crazy. Now then, assuming a duck’s foot is about 3 inches along the diagonal, and is roughly shaped like a diamond, we can easily find a ration between the sizes of a horse and a duck and, assuming that the horse’s strength will scale with its size, we find the strength of a duck-sized horse’s kick is 18000 lbf.  In pressure, that’s 4000 psi.

Just imagine it: 10 little 2-foot tall horses, each with the ability to put you in a cast with a single kick.”

For reference, 4000 psi is like taking a fully grown great white shark and taking all of its weight and putting it on one inch of surface.  Generally speaking, a femur fracture, breaking the strongest bone in the human body, requires about 1000 lbf, far under the force of the small horse kick.

However, there is one more important fact that will ruin any chance of the duck’s victory: while human bones are almost solid all the way through, duck bones, like those of any bird, are actually hollow with small cross bars running through the center, and, with the increased size of the duck, comes increased spacing between the bars, making them extra fragile.

While the large, clumsy duck may have a shot at crushing one or two of the small, but mighty horses, with their speed and agility, and their ridiculously powerful kicks, just a single tap from any of the ten horses may be enough to completely shatter the bones of the duck.

Honestly, I’d be very scared for my life if these horses existed and became aggressive.  Just imagine it: 10 little 2-foot tall horses, each with the ability to put you in a cast with a single kick, rushing at you from all sides whilst screaming in the way that only horses can.  How can the horse-sized duck hope to stand against such odds?

Have you ever seen a horse-sized duck? No? That’s because they don’t exist. But just because these majestic creatures aren’t real doesn’t mean we can’t have a heated debate about whether one would win in a fight against ten duck-sized horses.

Take a minute to imagine a duck. The way they waddle around might seem cute at first, but now take a look at this image of a duck’s mouth.

Just look at those teeth! It’s terrifying, and that’s just on a normal-sized duck. Try and envision those needle-like teeth and that weird spiky tongue on a duck the size of a horse. It’s quite frankly the stuff of nightmares.

It’s quite frankly the stuff of nightmares.”

But we can’t base this debate on fear factor alone, so let’s take a minute to examine this creature’s possible fighting tactics.

First of all, that giant beak and mouth of teeth could do some serious damage to those puny duck-sized horses. A regular horse and a regular duck can both bite pretty hard already, and I’m sure that if they were combined into one terrifying creature, then it would be able to inflict a lot more damage.

On top of this, a horse-sized duck would have massive webbed feet, which could easily crush its tiny horse adversaries. Heck, this giant duck would only need to roll over and it could demolish all ten of those duck-sized horses in an avalanche of feathers and fury.

I think we can all agree to thank our lucky stars that a horse-sized duck doesn’t actually exist, because let’s be honest — those duck-sized horses don’t stand a chance.