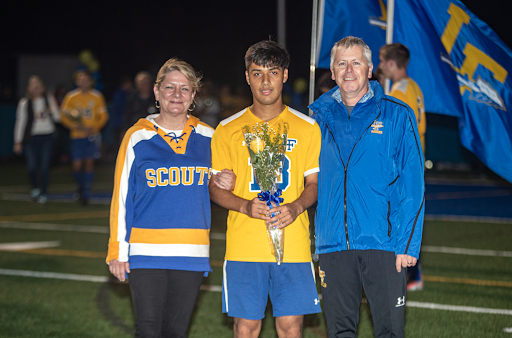 One Senior’s Journey from El Salvador

At just 14 years old, he was the new kid at a school in a foreign country, without his parents and living in a place where nobody spoke his language.

An avid Cristiano Ronaldo fan, a varsity soccer player, an employee at the Silo, a loving brother, and last but certainly not least, the best Clash Royale player in the school, Cristhian, a true jack of all trades, has worked hard to adjust to a new life.

Whichever endeavor Cristhian is pursuing, he is likely boasting a smile. This smile, however, did not come easy.

Cristhian Roberto Perla Henriquez grew up in a small farming town  in the Ahuachapan province of El Salvador.

For Cristhian, living on a farm meant waking  up every day at 6 a.m. to turn beans and corn into powder by hand.

After four hours of manual labor, he would do his homework and get ready for school, which was in session from noon to 6 p.m. Afterward he would hurry home for the night, doing his best to stay out of trouble, which wasn’t easy in El Junquillo.

“There were a lot of gangs; you could not go out at night. It was very dangerous,” Cristhian said.

Gang violence and organized crime are astonishingly bad in El Salvador, which is ranked one of the most dangerous countries in the world with the highest murder rate globally.

The gang culture in El Junquillo was a main reason that Cristhian moved to the U.S. in the first place. His life was in serious danger. El Junquillo and neighboring towns all had their own gangs, and some kids in high school and older were a part of these groups.

Occasionally, tension between groups became violent. “There would be shootouts, but they were mainly in other neighborhoods,” he said.

Gangs tried to recruit kids who were as young as 13,  and if a kid declined, there could be deadly consequences.

They soon recruited Cristhian; however, he says he did not give in, even without a father figure to guide him.

Most of Cristhian’s 12 siblings were already adults when his father died. But Cristhian was just two. The death of his father left his mother to care for the children alone.

Oftentimes, Americans take for granted the financial freedom that brings millions of people to this country every year in hopes of a better future. In El Salvador, upward mobility is not as obtainable, and most of the time, people who are born into poverty, stay in poverty. This, along with the high crime,  motivated more than 95,000 people to flee El Salvador for the US in just the past year alone.

This year has been the busiest year ever at the U.S. border with Mexico. Many of the 1.7 million encounters at the border include people trying to escape poverty and violence in Mexico, Honduras, El Salvador, and Guatemala.

In 2016, Cristhian added his page to the story of Salvadorans immigrating to the US. After finding out that Cristhian was being targeted by a gang in his community, his family decided they had to move him immediately. His sister, Alba, who was in the U.S., came up with the plan to send Cristhian’s mother money in order to get him to the U.S.

Cristhian and his brother, Anibal, then embarked on a 27-day journey with a goal of making it to America. Much of the journey was taken by commercial bus, which they rode through Guatemala and Mexico. They stopped many times along the way, either for food or to spend the night somewhere safe.

Cristhian does not think he could have made the trip without his brother. “Having Anibal with me made me feel safe,” he said.

He considers the final part of the journey to be “one of the scariest things” he has ever done in his life.

When Cristhian and his brother arrived in America, they took a flight from Texas to Washington, D.C where Cristhian enrolled in 7th-grade while living with an aunt and her family. Alba, who was living in D.C. at the time, did not live with Cristhian during these two years but checked in with him frequently.

He experienced his first bit of culture shock when he did not have to wake up at 6 a.m. every day to work. Although his new schedule proved to be much less demanding than his previous routine, it was hard for Cristian to get used to the dramatic change. Still, the teenager in him was grateful that he no longer had to work at the crack of dawn before heading off to school.

However, he was living without his mother, who remained in El Salvador.

“She did everything for me: she cooked for me, she cared for me. Right now, I feel bad thinking about her, that she’s not with me. It’s hard,” he said, as a tear emerged from his eye.

At school, he quickly made friends, but with the wrong group of people. His “friends” would start fights, get suspended, and just cause trouble. For someone who had just broken out of that same type of culture, he couldn’t risk falling into a similar cycle.

Cristhian began to keep to himself so he could stay out of trouble and keep this once-in-a-lifetime opportunity alive. His family then decided it would be best if Cristian moved again.

His sister Eva had been living in Lake Forest already, so Cristhian and Alba came to live with her. Lake Forest does not have a large Hispanic community, so Cristhian would have to learn English. And that was important to him and his family.

In the summer of 2018, Cristhian and  Alba drove more than 700 miles from Washington, D.C. to Lake Forest.

“It was very nice when we first got here, but also very different from before. I was feeling alone; I was feeling nervous about learning a new language,” Cristhian said.

He learned that one way he could fit in was to go back to his roots: fútbol.

Cristhian’s feelings of isolation eased after he joined the soccer team. “I could have friends when I started playing soccer,” Perla said.

When Cristhian showed up on the first day of soccer, the language barrier was a problem. Simple things like, “pass here,” or “switch the field,” were hard to communicate. Even subbing off the field was nearly impossible because he didn’t know if he was supposed to change positions on the field, or come out of the game.

“Cristhian is a determined player who gives everything he has got to the team.  He is an offensive player, with an attacking mindset.  He loves to take players on and looks to score,” Varsity soccer coach Rob Parry said.

As the soccer season progressed in 2018, Cristhian’s English was improving. He began to understand his teammates on the field, as well as communicate back in short phrases. It helped that he was a fantastic soccer player who led the freshman team in goals in 2018.

Instead of being shy because of a language barrier like when he first arrived at Lake Forest, he began to interact with many other students outside of the soccer team, regardless of if he could fully understand what they were saying.

“When I first met Cristhian through soccer, he was very open to me and the rest of our teammates. But I did notice he was a bit shy to other people in our grade. However after freshman year, it seemed like everybody knew Cristhian, and he broke out of his shell, which made me happy to see,” Nick Hardy, a close friend of Cristhian, said.

Right before the pandemic in 2020, Cristhian’s English had improved to the point where he could understand what people were saying to him and speak more like a native speaker.

“The kid that I met in 2018 was totally different from the young man that he has developed into. And not only did he learn a new language, but is learning independence that will stick with him for the rest of his life,” Shannon Ramirez, one of Cristhian’s teachers throughout high school, said.

The United States produces what many call the American Dream: The ethos of America and the reason why millions of people every year cross borders, leave families, and take risks to come to this great country.

Cristhian says he believes that studying and working hard can help him achieve the American Dream of finding a good job and a happy life.

Across the United States, Cristhian’s journey is not uncommon. People born into unfortunate circumstances, who have the drive and determination to make a life for themselves and their families, have a chance of achieving their own version of The American Dream.

Cristhian plans to study at College of Lake County next fall. He hopes to become an auto mechanic in the future.