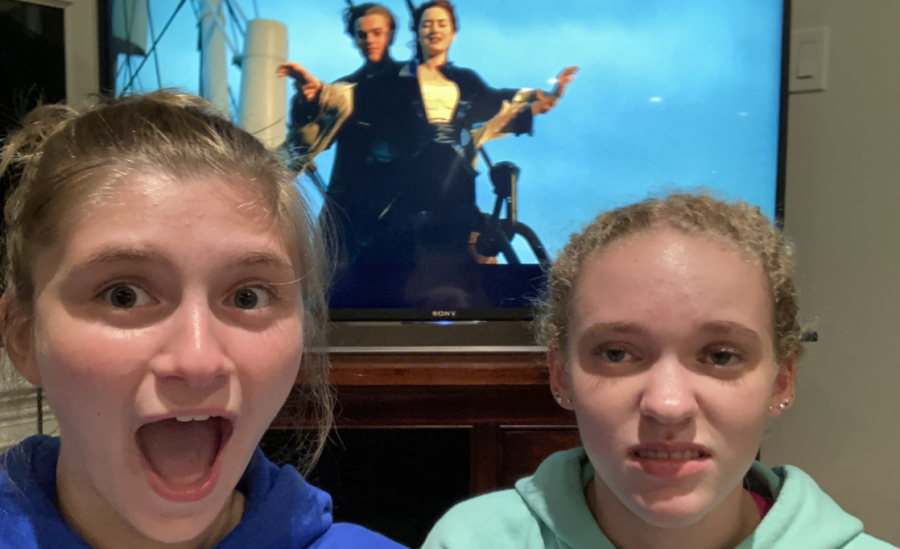 Side-by-Side: Debating the re-watchability of “Titanic”

Is the multiple Oscar-winning film "Titanic" really worthy of the hype? Is it deserving of multiple viewings? Movie lovers Saige Joseph and Kenna McBean, after watching it together, realized they had incredibly differing views on the iconic film.

“Titanic” is one of the most rewatchable films of all time

If any of you have ever seen Titanic, then I guarantee that you’ve been graced with the onscreen chemistry of Leonardo DiCaprio and Kate Winslet. That alone could make me watch Titanic 15 times.

Regardless, Titanic is one of the most rewatchable movies of all time.

From the breakthrough visual effects to the timeless love story and the Oscar winning history, Titanic has so much to offer for the audience. At this point, I’ve seen it 19 times, and each time, it gets even better (yes, I know that I’ve spent around 61 hours of my life dedicated to the masterpiece).  I enjoy it so much that I even purchased the DVD (it comes with two separate discs because it’s so long).

I would like to acknowledge that Titanic is practically an epic with a run time of 3 hours and 14 minutes. Nonetheless, every single second is worth it.

There are so many subtle details, allowing viewers to spot something new with each watch. Certain elements of reality sprinkled throughout bring even more life to the film.

Did you know that the exact time that it took the Titanic 2 hours and 40 minutes to sink, which is the exact amount of time that the film portrays Jack and Rose on the Titanic? In addition, the elderly couple portrayed laying in bed together was based on an actual couple that died on the Titanic.

One last fact for you, the time on the clock at the end of the movie when Jack and Rose reunite is set to the exact time that the Titanic sank.

Kenna might believe that it’s a one and done, but that is in fact inaccurate. If you were to simply view the iconic film just one wimpy time in your life, then you would miss out on the rich details that lie within. Kenna should be thanking me for the fact that I made her watch it a second time.

Now, I will admit that the screenplay is not the best; Kenna has a slight point there. But why are we even focusing on that? It’s not like it won Best Original Screenplay at the Oscars. It did, however, win the many Oscars that it rightfully deserved, which include: Best Picture (yes!!), Best Directing, Best Cinematography, Best Original Score, Best Visual Effects, Best Film Editing, Best Costume Design, Best Sound Mixing, Best Production Design, and Best Sound Editing. Also, both Kate Winslet and Gloria Stuart received Oscar nominations for their portrayal of Rose in Titanic, yes, they BOTH did for the same role (I know, it’s impressive). Even the Academy agrees with the fact that this movie is one of a kind. I mean it even gets an 89% on Rotten Tomatoes–that’s fresh.

I do believe that Leonardo DiCaprio made the best of the terrible screenplay, and therefore I stand by the fact that he was snubbed of an Oscar nomination for his role.

If you claim to dislike Titanic, I encourage you to think twice about the fact that without it, we would not have the megastar that Leo is because it was the movie that made him a star. And, if you want to see a movie that excels with visual effects, look no further.

Kenna does have a point in saying that the film romanticizes a horrible tragedy, but I think that it actually does a good job of showing the terrible social factors that played into the sinking of the ship. It demonstrated the mistreatment of lower-class citizens compared to the first class. It’s not like the film just disregards how terrible the sinking was.

Now I want to end with this: if you’re ever at a loss, not knowing what to watch, turn on Titanic. It has about every component that you could want in a movie. It’ll make you cry (guaranteed), keep your attention, and make you wish you were alive in the 90s when young Leo was the person to be.

“Titanic” isn’t all that

I have seen Titanic twice and that was enough.

I feel no need to ever watch this movie again in my entire life. I will give credit to Kate Winslet and Leonardo DiCaprio for having great chemistry and being talented actors, but this movie did not even begin to show the full range of their abilities. Saige may rave about this movie, but keep in mind that she has watched way too many times—19 times to be exact. Should you be concerned? Yes, yes you should.

To start, this movie is SO long, almost in an obnoxious way. After the boat starts sinking, I just want the movie to be over. Leonardo DiCaprio’s gorgeous face was the only thing that made me sit through this entire film. It was only out of the sheer kindness of my heart that I sat through this thing for a second time when I watched it with Saige.

I need to pose an important question: why the heck did this movie win so many Oscars? It won eleven at the 1997 Oscars, even though there were so many other amazing movies released that year including “Good Will Hunting” and “As Good As It Gets.” Titanic does deserve some recognition as the cultural phenomena that it is, but eleven Oscars? I don’t think so. That seems a bit extreme. Titanic is over the top in every way, shape, and form, but I don’t think that that renders an Oscars sweep.

The first part of the movie is, I’ll admit, slightly enjoyable. With Jack and Rose falling in love and running around the boat trying to escape Rose’s crazy family, it is romantic and fun while acting as escapism for the characters and the audience. The boat itself is stunning, and one of my favorite parts is how beautiful the costumes are. However, the Titanic is portrayed as romantic and whimsical; while I’m sure it was when it was floating, it definitely was not when it was sinking.

This doesn’t sit well with me because I feel that everyone in this movie is profiting off of a horrible tragedy about a love story that didn’t even exist. Even though this movie was made many years after the event itself, it is still a very dark part of history involving the casualties of 1,500 people in the middle of the Atlantic Ocean.

The ending is frankly just hard to watch, with blunt trauma being thrown at you left and right. The scene when the boat starts sinking is really stressful and emotionally taxing. It almost seems like it doesn’t end, with the scene dragging on and on. I don’t know when I would be in the mood to see that much pain portrayed on screen again.

The point of the film is to make a statement about the world. While I recognize that this isn’t always comfortable, nor is it supposed to be, the ending of this movie is overly disturbing nonetheless. I understand that they were trying to convey a message, but I still don’t know why anyone would need to see it more than once.

Finally, I need to talk about this screenplay. Can I even say anything nice about it? No, I can’t. The amount of times Jack and Rose unnecessarily say each other’s names throughout the script is enough to make me nauseous. Even though the popular stars of the time tried to save it, the script pulled everything down with it. It was so flat, and the dialogue seemed forced and awkward. Both of them were painted to be just pretty faces that found each other in the midst of a tragedy, but even that is a bit of a stretch.

Saige is correct in saying that Leo was catapulted into stardom after this, but it is only because he was the gorgeous star. If you think about it, Titanic is almost more of an action movie than anything else. Even though it is portrayed as a romantic drama, it really is not.

Titanic is supposed to be the end-all, be-all of movies, but I don’t think it is. It was definitely groundbreaking when it came out, but now, it’s just kind of basic and cheesy. My advice to avoid judgment from people (mainly Saige) is to yes, watch it once, but no more than that.