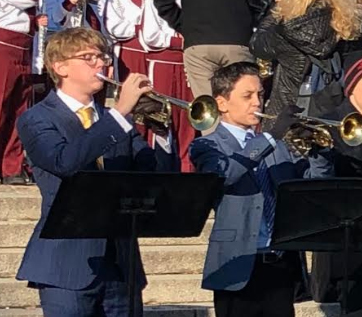 The dulcet tone of a trumpet is one of the defining sounds of any Veterans or Memorial Day service across the United States. Within our own commemorative services for these patriotic celebrations at the high school, the responsibility of perfecting the bugle call known as ‘Taps’ can be an immense challenge for any underclassmen trumpet player.

Because of the challenge, the duty is traditionally presented to a pair of upperclassmen. However, things were much different this year. The two musicians honored with performing the iconic call and echo were sophomore trumpet players Koen Brown and Isaac Poulton.

Between ‘Taps,’ technical jazz solos, filling in for missing parts, and sitting first chair in the audition-based Wind Ensemble as freshmen, the pair have already made an impressive mark on the band program. Brown recalls the first time he met Poulton in sixth grade band.

“Isaac moved from California to Deerpath [Middle School],” he explains. “It was nice to have another trumpet player in the band.” Poulton mentions that the connection between them stemmed from their talent for the instrument at a young age, saying that they “were both pretty decent players for sixth grade.”

Despite their friendship, a friendly rivalry has always existed between them.

Poulton says the competition stems from a motivation to improve. “The thought is that ‘I’m trying to get better, so I need to beat them at this,’ so having that constant opposition is what keeps us growing,” he said.

It drives them to practice for hours a day, Poulton said.

“There have been moments where I’ve felt discouraged. But the more you practice, the better you get.”

“Last year, I remember practicing our playing test for the part assignments two hours a day, every single day for months, just so I could get first.”

“This man got first every time,” Brown adds.

Practicing takes up a large chunk of any musician’s time, and playing or even listening to inspirational pieces are ways that the pair have stood out among a sea of trumpeters.

“Music is a great pastime, although playing the trumpet for 45 minutes wears out your embouchure,” Poulton says.

“There have been moments where I’ve felt discouraged,” Brown adds. “But the more you practice, the better you get.”

Their unique abilities truly make them a valuable part of the Wind Ensemble. Back in early March of last year, the band and orchestra were set to play the infamous William Tell Overture. On the day of the concert, the lead trumpet had taken ill and was in need of a replacement. Poulton, a freshman at the time, only had a few hours to learn the music and be ready to perform, and he did just that.

During rehearsal that day, Poulton not only had the music down, but was eager to push the tempo. This was not only impressive, but relieving, as the primary trumpet part is among the most important.

“I ended up showing up to the concert, having played the music once or twice,” Poulton mentions.

Similarly, Brown stepped up to the plate within the jazz program, having started his own jazz combo last year. The talented group– known as Niki and the Melon Boys– performed at both Jazz Fest and the Talent Show, among other events.

Even on the first day of rehearsal, Brown had the entire group working on soloing and improvisation, two of the most difficult aspects of the genre.

When asked about their favorite trumpet players, the answer was plain and simple: Wynton Marsalis. Much like Poulton and Brown, Marsalis began playing at a very young age, and when he was 19, he professionally recorded nearly every classical trumpet piece, going on to win nine Grammys in his career.

The pair marvels at his immense talent, Brown saying, “You listen to him play, and it’s just so intelligent!” Poulton adds that Marsalis is “perfect every time,” which speaks for itself.

The exceptional aptitude that Poulton and Brown possess for the trumpet has lasted their entire lives, and both plan on playing in the future.

“I don’t know if I’ll make a career out of it, but playing music is definitely something I see myself doing for the rest of my life!” Poulton says.