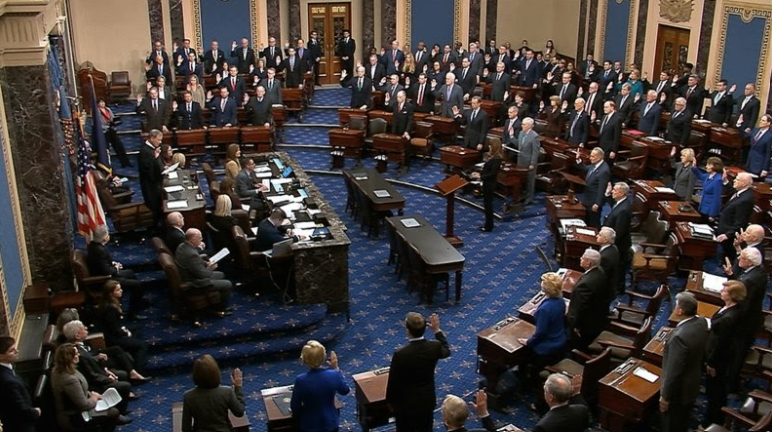 The Senate was Hypocritical to Rush a Supreme Court Appointment

The U.S. Senate voted 52 to 48 to confirm Judge Amy Coney Barrett to the Supreme Court.

“If an opening comes in the last year of President Trump’s term, and the primary process has started, we will wait until the next election” Senator Lindsey Graham (R-SC) said at The Atlantic Festival in 2018, regarding the process of appointing a new Supreme Court justice during an election year.

“You’re on the record,” responded The Atlantic‘s editor-in-chief, Jeffrey Goldberg, followed by scattered laughs throughout the audience.

It’s official now: the Senate has confirmed Judge Amy Coney Barrett to the Supreme Court with only eight days until the election.

Over a month ago, Justice Ruth Bader Ginsburg of the Supreme Court passed away from complications from pancreatic cancer. A pioneer as a woman in the judicial system and one of the most celebrated women in America, Justice Ginsburg opened up countless doors for many in an exclusive and patriarchal judicial system. From declaring it unconstitutional for schools funded by taxpayer dollars to bar women to pushing for the protection of pregnant women in the workplace, Justice Ginsburg changed life in America for many during her time in both the appellate court in the DC circuit as well as the Supreme Court.

Regardless of how Justice Barrett may lean politically, let’s recall back to February 2016, when Justice Antonin Scalia suddenly passed away. A conservative Justice with an impressive career, Scalia made it a priority to defend originalism in constitutional theory and to literally interpret the constitution at all times. February 2016 is strikingly similar to the political landscape now, where a Justice passed away during an election year, with the sitting president leaning in the opposite political direction as the late justice.

Naturally, President Obama scrambled to find a replacement for Justice Scalia. However, almost immediately after Scalia’s death, Senate Majority Leader Mitch McConnell’s knee-jerk reaction was to deny any appointment to the Supreme Court.

McConnel stated that, “the American people should have a voice in the selection of their next Supreme Court Justice. Therefore, this vacancy should not be filled until we have a new president”.

With the 2016 election eight months away, this blockage of President Obama’s potential nomination was seen as shocking, but many Republicans in Congress stood behind McConnell’s declaration, and stated that it is constitutional to leave the next Supreme Court nomination to the next president.

Fast-forward to September 2020, these two situations may seem extremely similar at first glance; however, one of the biggest discrepancies between them is the way McConnell reacted to Ginsburg’s death. McConnell pledged hours after Ginsburg’s death to hold a Senate vote on President Trump’s nominee to succeed Justice Ruth Bader Ginsburg.

“Americans reelected our majority in 2016 and expanded it in 2018 because we pledged to work with President Trump and support his agenda, particularly his outstanding appointments to the federal judiciary. Once again, we will keep our promise,” McConnell said amidst the chaos of Ginsburg’s death, “President Trump’s nominee will receive a vote on the floor of the United States Senate.”

If the Republicans in the Senate apply the principle that they requested four years ago, which was to let the people decide, then they would not have gone forward in nominating a new Supreme Court justice days before the 2020 Presidential election. This hypocrisy is what further politicizes the Supreme Court, whose sole job is to interpret the Constitution.

This hypocritical situation should worry you. Regardless of how you may feel about Roe v. Wade, Obergefell v. Hodges, and the Affordable Care Act, this rushed nomination and appointment of Judge Amy Coney Barrett to the Supreme Court is a terrifying example of the ways that our democracy is manipulated and toyed with in order to result in a favorable outcome for those with more governmental power.

Just as the United States’ judicial system must follow precedent as authority for deciding cases, the United States Senate should have done the same, and follow the precedent that they set in 2016 when they refused to see President Obama’s nomination to the Supreme Court.