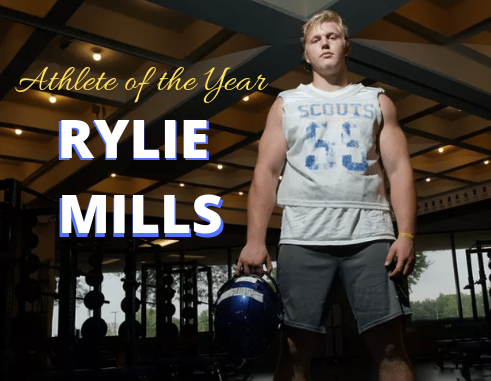 The Forest Scout’s 2020 Male Athlete of the Year: Rylie Mills

Over the past four years, one of the highest recruited athletes in the history of LFHS dominated the North Suburban Conference on Friday Nights. That athlete holds many records on the turf at West Campus — as well as the weight room — and was an all around nightmare for opposing quarterbacks. That athlete is a new member of the Notre Dame Fighting Irish: Rylie Mills.

Mills comes from a very athletic family, and has learned a lot from his older brother when it comes to college athletics. Jaxon Mills, who recently graduated from Dayton, played football for the Flyers. Mills looked to his brother for advice about the complex machine that is the NCAA recruiting process — and it is only more complex when you are an ESPN Top 300 football recruit with 28 Division I offers.

“I talked with my brother more about why he made his choice and what he looked for. But in terms or visits, camps, and meeting with the coaches — it was all new to me,” Mills said in an article last May when he was in the midst of the recruiting process and how he was able to turn to his brother for help.

Now, Mills will be taking the field as a member of the Notre Dame Fighting Irish, a very prestigious and historic football school and program.

In Mills’ senior season he had 22 tackles, 10 of which were for a loss, and 3 sacks, doing this all while playing alongside one of the best linebackers in the state in Mac Uihlein (who had 102 tackles this year), and dealing with a mid-season injury.  Even when he wasn’t credited for a tackle, Mills was in the backfield hurrying quarterbacks into making forced throws, and clogging up opponents’ run games at the line of scrimmage on what seemed like every play.

Beyond all of the numbers that go with Mills’ name, he was much more than a stat on a recruiting sheet.

I couldn’t have asked for more from Rylie.”

“Rylie has always been a great leader of the team…he never was cocky or boasted about his college process and that just shows how humble he is and his respect for his peers,” senior Punter and South Carolina Football commit Kai Kroger said. “During games this season he would always be hyping us up on the sidelines. I couldn’t have asked for more from Rylie.”

Not only was Mills able to develop his own game day-in and day-out at practice, but he was able to make his teammates better with his selfless attitude and willingness to get the best out of his teammates.

“Rylie was a great talent to line up against each day at practice,” said senior offensive lineman and Lehigh commit Charlie Aberle. “We fed off of each other’s energy throughout practice, and sometimes things got a little heated, but it was all for the betterment of the team. We both love to compete so there was a ton of pride on who won each drill.”

Even players who weren’t as highly recruited as Rylie were beneficial to.

“Rylie was an incredible player to play beside.  I had the opportunity to practice with him a lot outside of just scouts football and I can say from doing both that he himself and his work ethic are top of the line,” senior wide receiver and Kentucky football commit Jai Williams said. “What I love about playing with him (Rylie) is with all the time and effort he has put in, he still focuses on the little things, not just with himself but with others as well.  He was always the teammate that pushed others which I strongly appreciated.”