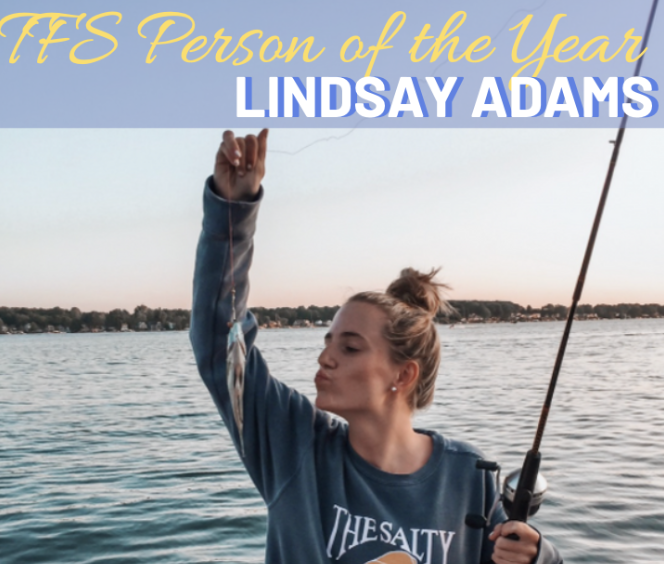 The Forest Scout Person of the Year 2020: Lindsay Adams

When the news released that Lindsay would be this year‘s ‘Person of the Year’ for the awards we give out through The Forest Scout at the end of each school year, the amount of texts that flooded my phone saying that she was the perfect person for this award was insane. The editorial board here at TFS, and myself in particular, instantly knew that we had made the right choice for this award.

The overpouring amount of love that spilled out of her friend’s when I asked them what they had to say about Lindsay; so much so that I could write an entire essay just citing their quotes.

Mimi Yale, a lifelong friend of Lindsay’s, perfectly described our person of the year.

“Lindsay has always had the kindest, most sweetest heart. I think almost every person in this school that knows Lindsay personally can attest that she simply does not have one bad bone in her body,” she said. “She is truly my angel and deserves the world.”

Anyone speaking to Lindsay about the JV tennis team, a team she has been a part of for all four years of her high school experience, could see her utmost passion for the program because of the ways her eyes light up when she talks about it.

“The tennis program at the high school is really special to me, and is more like a big happy family in my life,” she said. “Particularly in the last two years, my team has been so close and I will forever cherish the memories we have had.”

Particularly this year as captain of the team, Lindsay graced the squad of girls freshman through seniors with her leadership and positivity.

One of her teammates, junior CC Carter, has looked up to Lindsay for a while now, being an underclassmen on the team with Lindsay the past few years.

“I got to know Lindsay her sophomore year on the team, and since then she has become so much more of a friend than a teammate to me,” she said. “She is such a great role model for me and I know I can always go to her with anything.”

As we all probably know, high school is hard to manage for solely a student alone participating in no extra activities.

But the fact that Lindsay has participated in tennis all of these years, as well as ‘some clubs here and there,’ as she shared with me, is remarkable. She truly embodies the well-roundedness that a person of the year should have.

Before talking about our senior year being cut short, which came up pretty quickly, Lindsay raved about how much high school has left an impact on her the past three and a half years she has been in the building.

“Most of my favorite memories are from my senior year; the first day of school, going off campus for lunch for the first time, the pep rally, hockey games, committing to college, the first football game that was on TV,” Lindsay said.

She shared that most of her favorite memories also take place with her friend group of 16 girls, who make her laugh until she cannot breathe. It’s no surprise to me that Lindsay’s sweet personality has attracted these many friends throughout the years.

Lindsay then said that she will always consider herself a Scout – something most of us can probably relate to while being out of school and missing walking through the friendly halls of the high school.

She admitted that high school was not always all sunshine and rainbows, though, especially senior year as many people looked up to her, being the oldest in the school.

“I won’t lie, it’s great being the oldest of the school, but it also brings on responsibilities,” she said. “People look up to you, so it was important for me to be a good role model especially this year.”

With the news of the pandemic cancelling the second half of our year, Lindsay said that she was at a loss for words.

“When thinking about the stuff we have missed out on this year, it makes me so angry and sad,” she said.

But of course, the positivity that she so clearly holds instantly came through, even when discussing a sad situation.

“With the pandemic starting, I’ve tried to focus on the good and keep myself distracted, as well as spending time with family and keeping in touch with my friends,” Lindsay said. “I’m trying to make the best of it by telling myself that this will only make us even stronger.

Lindsay said that her support system of her family and teachers at school have kept her strong during these times. She said that she has loved everything the teachers do to make sure we are honored and recognized, as well as the nice messages that they send each day.

It’s one thing to be positive, but it’s another when anyone and everyone in your life can recognize that positivity and cherish it so much. Lindsay’s friends did just this when I asked them about our person of the year.

“Lindsay is the most positive person I know. She truly is one of the best people I’ve ever met, and there’s no better person than Lindsay to be person of the year,” longtime friend senior Nicole Doucette said.

Again, the positive words her friends gave were astonishing. “Strong,” “down to earth,” “amazing,” and “loyal” are just a few of the words, for a lack of inserting their many beautiful quotes and making this article pages long.

Outside of her immediate friend group, Lindsay’s bond with her family, and her mom specifically, is immensely strong.

“This is such an honor for our entire family,” Mrs. Adams said regarding the award. “We have always referred to Lindsay as an ‘old soul,’ very mature and wise beyond her young age.”

She explained that giving birth to Lindsay prematurely, her weighing only 2 pounds and 3 ounces at birth, that Lindsay has always been their “little miracle.” Their bond is obviously strong by the way she speaks so highly of Lindsay, and with such love.

Of all the many well rounded, athletic, and personable people in our school, it’s clear there is something special about our this year’s person of the year.

One of Lindsay’s best friends, senior Keaton Wilhelm, summed it up perfectly – “There is no one better to receive the title “person of the year” than Lindsay. Not only is she level headed, outgoing, strong, loyal and observant, but she is the type of friend that you are lucky to come across in a lifetime.”

4 Responses to “The Forest Scout Person of the Year 2020: Lindsay Adams”