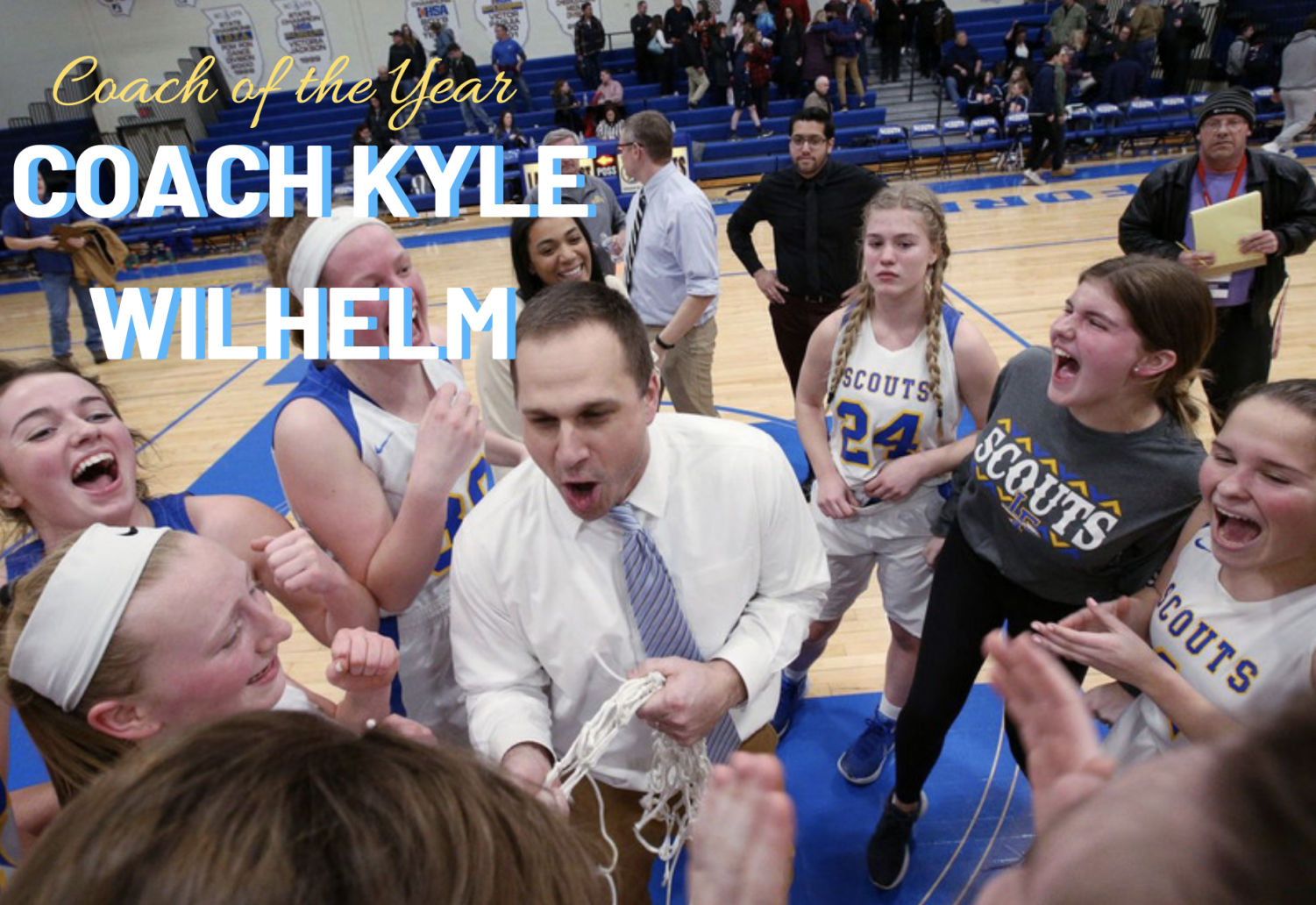 The Forest Scout’s 2020 Coach of the Year: Mr. Kyle Wilhelm

As the final seconds of their season abruptly came into focus, the Scouts made their last substitution of the season to bestow senior Halle Douglass with the proper farewell to conclude her illustrious high school career in Palatine at the Class 4A Girls Basketball Sectional title game. The first to greet the athlete overflowing in emotion as she left the court  — head coach Kyle Wilhelm.

The Scouts finished the third quarter behind a blistering 11-2 run after two critical threes by Douglass to pull within four of Fremd and came as close as two in the fourth. A scoring drought that followed changed the tide and the Vikings put the game out of reach, but the interaction with Wilhem was more than emotions from the incoming loss.

“He really taught me to have confidence with my game and always was pushing me to my next goal and helping me achieve it,” Douglass said, the school’s all-time leader in points and Wisconsin commit in the fall.

Having accumulated 142 wins since taking the head coaching position in 2011, after serving six seasons on the freshman and sophomore level and 98 in the past four seasons, Wilhem’s confidence in each of his student-athletes is a significant reason for the program’s culture change.

“To me, Wilhelm was truly the greatest coach ever. He was someone I could talk to when I needed help, whether it was about basketball or just in life in general. He pushed each and every player and wanted to make them the best they could be. He has developed me to be the player and person I am today,” junior guard Molly Fisher said.

Fisher, who heaved the heroic shot from the left baseline in a late December tournament to defeat Benet — the top ranked team in the state — after initially having her shot blocked, made clear the Scouts were to be watched once again after a Super-Sectional appearance the previous season.

However, a string of injuries that occurred during the end of the winter tournament put into question if the Scouts could stay healthy enough to make another deep postseason run. Those deeper in the rotation had to step up.

“We started to have a series of injuries and they piled up. We had a lot of players step up — they stayed positive and we finished the season really strong,” Wilhelm said.

Wilhelm’s ability to coach around those injuries put faith in each team member that even without their top players the team wouldn’t lose a beat.

“We even had one game with four starters injured on the bench. But being able to overcome that only helped our team in the long run,” Douglass said.

Being able to overcome those injuries actually strengthened the team in the final stretch of the season, which included more unforgettable moments for Wilhelm and this team.

“My favorite memory with Wilhelm this past season was winning our third regional, and it was our second in a row at home. That was our last home game of the season, the gym was packed, and I think we realized how far this program has come — it was just an awesome moment, and we wouldn’t have been there without Wilhelm,” Douglass said.

To me, Wilhelm was truly the greatest coach ever.”

Wilhelm announced in the days following the season’s conclusion he will be stepping away from the team after nine seasons to spend more time with his family.

“I have started coaching my kids youth sports, and being able to be a part of that more is going to be special.  I am looking forward to attending all of my children’s events,” Wilhelm said.

Although the winningest head coach in Scouts’ Girls Basketball history will be missed, he’s raised the expectations for each level of the program for next season and those following.

“I’m going to miss it a lot. I’m going to miss the players, the coaches, the relationships, the feeling you get on game day, being in big games, and watching players succeed at a high level,” Wilhelm said. “I’m definitely going to miss being a part of all of that.”