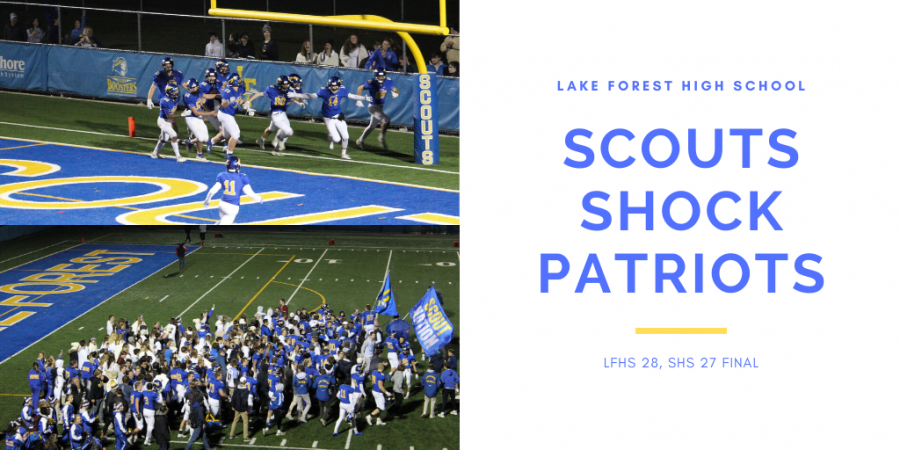 20 points. That was the deficit the Lake Forest Scouts faced on two separate occasions on Friday night.

This wasn’t something anyone at Varsity Field was expecting to happen – just to see all the hard work of this Scouts team get washed away by the Stevenson Patriots.

The Scouts defense rose to the occasion early in this ball game, forcing Justin Hiller and the Patriot offense to turn the ball over early in their own territory. Unfortunately, the Scout offense was unable to capitalize on both opportunities.

Stevenson made up for those blown opportunities, as they went on to score 20 unanswered points in the first half.

Jaylen McFadden and Justin Vincent each had two touchdown receptions, while quarterback Justin Hiller threw three total in the first half. The Scouts went into the locker room finding themselves down three scores on senior night. Many fans found themselves heading for the parking lots.

We have seen this before. The Scouts went into halftime down ten points to Stevenson last year, and the Boys in Blue were able to mount a comeback – but this was going to be an even bigger challenge.

Despite the daunting test, you had to take this into account: the Scouts have a senior class filled with athletes such as Rylie Mills, Kai Kroeger, Charlie Aberle, Connor Morrison, the list goes on. This team wasn’t going to go away easily. To go along with that athletic senior class, a Junior by the name of Mac Uihlein turned up the heat in the second half.

The Scouts came out with a purpose in the second half cashing in a touchdown on their opening drive, thanks to a 2 yard run by Mac Uihlein to cut the deficit to 13. Stevenson came right back and stretched the lead to 20 later in the third quarter, making the game 27-7.

Despite a feeling in many fans at Varsity Field that the outcome wasn’t likely to go the Scouts’ way, the Boys and Blue never gave in. They just kept fighting.

Down 20 points with just over 7 minutes remaining, what would happen may now be known as the “seven minutes of magic.”

Uihlein was able to punch it into the endzone for a second time after a solid drive led by the legs of sophomore running back Jahari Scott, who finished with 112 yards.

Stevenson came out on their next drive very lackadaisical, feeling confident that this game was theirs, running the ball trying to eat up as much clock as possible.

Head coach Chuck Spagnoli was calculated in deploying his two remaining time outs, one of which he used after the second down run by the Patriots. Stevenson decided to throw on third down, which ended up being incomplete – stopping the clock, and forcing a punt.

A solid return from senior defensive back Charlie Altounian put the Scouts in Patriot territory. Things started to look up with just under six minutes remaining in the game.

Another drive led by the Scouts running game got the Scouts all the way to the two-yard line, this time with junior quarterback Richie Hoskins showing off his running skills. To cap off the drive, Mac Uihlein found the endzone for the third time pulling the Scouts to within 6, and that is when the atmosphere at Varsity Field really started to pick up.

A quick three and out by the Patriots gave the ball right back to the Scouts, with the punt going right around midfield. Then Hoskins dropped back to pass on first down, and found senior Kai Kroeger wide open down the left sideline, completed his first pass of the night, and Kroeger took it all the way to the house for a 59 yard go-ahead score with 2:39 left in regulation, giving the scouts a 28-27 lead, their first of the night. All but nine of the Scouts’ 68 total passing yards came on that decisive play.

To seal the game, Justin Hiller was sacked by guess who, senior defensive end Rylie Mills, sealing a victory in what could be his final game at Varsity Field.

Students rushed the field after the conclusion of the handshakes and the post-game celebration was on. Everyone filled with excitement and asking themselves, “Did that really happen?”

This win was monumental for this program, and arguably the most important win in program history. What a night for the Scouts. They now hold the longest active playoff streak — now at ten years in a row — in the North Suburban Conference after they ended Stevenson’s 30-year streak (1989-2019).

Prior to the game, Coach Spagnoli asked his team when the last time the Scouts beat the Patriots in back to back seasons. The room was silent. No one could give him an answer. Spagnoli broke the silence, answering his own question, “This year.” Boy, was he right.

But, as Spagnoli would be quick to point out, the ride isn’t over just yet. The 14th seeded Scouts will travel to face the No. 3 seed, Belvidere North this Friday in the first round of the IHSA playoffs. If the Scouts were to win, it would be the continuation of a storybook season that has been full of ups-and-downs. But even if the Scouts find themselves out of the playoffs come next week, that result would never erase what happened on a special night at Varsity Field.