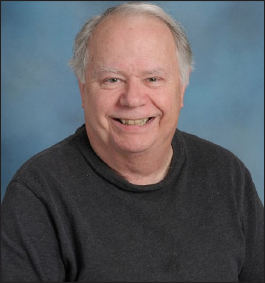 If your teacher has ever had trouble with a projector, computer, or other piece of technology, you may have had Ron Butcher come to the rescue.

Butcher, who will retire this month after 17 years, says this is his first job in education, adding that his original career was as a chemist, but he was always into computers as a hobby. He’s enjoyed a varied career, but says that possibility of being called for help, always on the clock, is what has kept the job interesting.

“Here it’s always different…Everyday there can be something different with a teacher,” he said.

Butcher has made his own impact here with his straightforward and simplified approach. He knows that with the shortened class periods, any tech problems can bring a class to a grinding halt. He feels it’s his responsibility to make sure everything stays moving quickly and efficiently, and that a classroom’s technology should mirror that.

“I have a personal philosophy, it should be transparent,” Butcher said.
Because this task is much easier said than done, Butcher, along with others in the tech department, are often used as a catch-all for problems large and small. He says this was part of a learning curve when acclimating to the job when he first started.

“The thing what takes the longest is learning how the school functions as a whole,” Butcher noted. “Getting a lay of the land, getting accustomed to the culture.”

Of course, the 21st century has brought massive changes to the technological world. Butcher, however, says the job still feels the same.

“The job hasn’t changed so much,” Butcher said, “It’s not harder, but it can be challenging sometimes to make sure everything plays nice together.”

Butcher cites new platforms and technology, as well as what he calls the reintroduction of Apple products to the school, as main difficulties on the job over the years.

Butcher’s coworker Robert Parry says no one in the tech department knows these products, such as Mac computers and iPads, like Butcher.

“He’s going to be difficult to replace,” Parry said.

Parry added that what makes Butcher great to work with is not just his knowledge and skill, but his work ethic.

“If he hears of an issue, he’s there,” said Parry.

Parry says he and Butcher share music tastes, and he’s lost track of the number of times Butcher has come in humming a tune, and it’s stayed stuck in his head until the next morning. They joke about who gets the short straw to respond to a call for help and reboot a teacher’s computer, which Parry estimates solves 90% of all problems.

For these reasons, Butcher says there’s going to be a lot to miss from this job, including “the people, the students, the faculty,” and all the people who have come and gone throughout the years. He reflected on the friendships he’s made, what he’s learned, the support he’s provided, and the people he’s gotten to work with.

With all the memories he’ll take with him when he retires this spring, he will be leaving many more with those he made an impact on. With Butcher’s help, Lake Forest High School has been able to get past the occasional computer bug or crash and focus on its mission of education, and in the thousands of students that have passed through these halls, the importance of that cannot be measured.