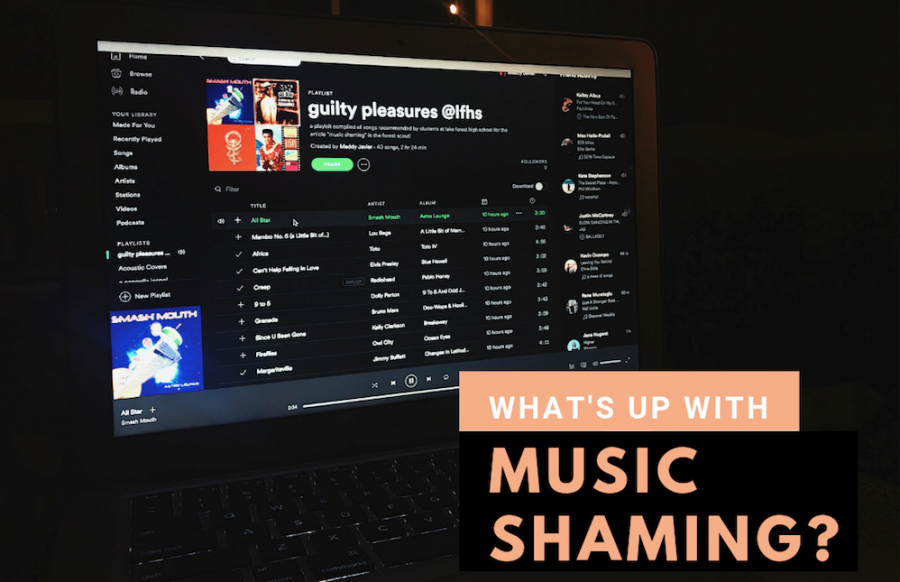 What’s Up With Music Shaming?

I opened the car door to the passenger seat, and was greeted with the daunting question: “Do you want the aux?”

A wave of thoughts flooded through my mind. If I said yes, I could play my music. Except, what if they didn’t like what I chose? How could I alter the songs I played based on the person or group I was with?

When we’re alone, we listen to our music with no fear of judgement for what we enjoy. However, as soon as we’re with another person, what we decide to listen to will consciously, or even subconsciously, change.

Why do we decide to change the music we listen to with others? Is it to please the other person? What about the pressure of having a good music taste” What even dictates as a good music taste? Who decides that?

We don’t talk about it, but the issue of music shaming exists all around us. Most of us barely realize we’re doing it, or the effect it has on others. We judge others for what they decide to listen to, simply because it may be different from what we like. While we judge others, we also have the fear of being judged ourselves.

“Music shaming is very prevalent for no good reason,” Junior Brooke MacDougal said. “I think people should be able to enjoy music that makes them happy. I understand that everyone has different tastes, but that doesn’t mean that you should make fun of someone just because they like to listen to something different than you.”

When we’re alone, we listen to our music with no fear of judgement for what we enjoy. However, as soon as we’re with another person, what we decide to listen to will consciously, or even subconsciously, change.”

One of the most common forms of music shaming at LFHS is the simple question, with the underlying connotation of judgement.

“You like country music?” someone asks, with a raised eyebrow and subtle smirk.

That one question can create a catastrophic rift between two opposing music tastes.

Not everyone who dislikes country music acts this way, but there’s a significant number of students who have made an impact so that the tension between the two groups doesn’t go unnoticed.

While I personally don’t listen to country music, I still feel the judgement and questioning of my own music taste among my peers, friends, and family. Because when you think about it, it isn’t only country music that gets shamed.

It ranges from musical theatre, Christian rock, indie, alternative, mainstream pop, jazz, classical, and even the rap that some adults will claim is “not even music.” Each genre of music gets their share of shaming from either the music industry or the people listening to it.

Whenever someone asks, “What kind of music do you listen to?” I struggle to come up with a quick answer, often avoiding the question with, “I listen to a bunch of different genres.”

For me, music taste can’t be described in a singular genre or artist. The music spectrum is endless, and while I may listen to a particular genre more often than another, I don’t like to let one thing define me. Although, another part of the problem with responding is the fear of being judged for what I enjoy listening to.

There’s another side of me that aches to push away that fear.

Ever since I was young, music has played a large role in my life. Whether it be singing for my church, taking voice lessons, participating in choir, going to concerts/shows, doing musical theatre, or simply listening to it, music is one thing in my life that I don’t think I’d be able to truly live without.

That’s why when I notice others putting people down for enjoying something as simple as a song or music artist, it hits me hard.

One of the things I love most about music is how it can bring people together, rather than tear them apart.

For some, music has led them to make connections with people.

“I’ve made friendships with people that revolve completely on the type of music we both listen to,” said senior Nell Burgner.

For others, such as senior Rana Muratoglu music has helped them find their place in high school.

“Music is something that has catalyzed my friendship with people, and has helped me find a home at LFHS,” said Muratoglu, who is a TA for Foresters, a Madrigals leader, and a co-founder of the a cappella group, Lowkey Treble. “Even though my specific taste in music may be different than that of the people I’m close to, surrounding myself with those that appreciate the influence and artistic capacity of different kinds of music helps us find a commonality within it.”

Similar to Muratoglu, music has brought me to meet some of my best friends these past four years at LFHS, whether it be in choir, the musicals, or by having the same interests in music style.

Another feature I love most about music is the ability to share it with others.

A few years ago, I began asking people for song recommendations. Since then, I’ve fallen in love with learning about what other people like to listen to. I think that a person’s music taste says a lot about them, and exploring it makes me feel closer to them as an individual. It’s also given me a chance to broaden my own music taste and find amazing new songs to listen to.

It’s allowed me to explore new genres and styles of music that I never would have listened to on my own. Sometimes, their music ends up even becoming one of my new favorite things to listen to.

My dare to you is to listen to something new. And even if you don’t vibe with it, that’s okay. The idea is to expose yourself to new music, by doing this, hopefully you can learn to be cognizant of how your judgements can make someone feel before shaming them for liking a certain song or artist. The other side of that, is that you shouldn’t be afraid to share your music with others based off of the fear of being judged.

So with that, my final question is: what’s the reason of purposefully shaming someone for something that makes them genuinely happy and helps to bring people together, especially something as diverse and universally loved as music?