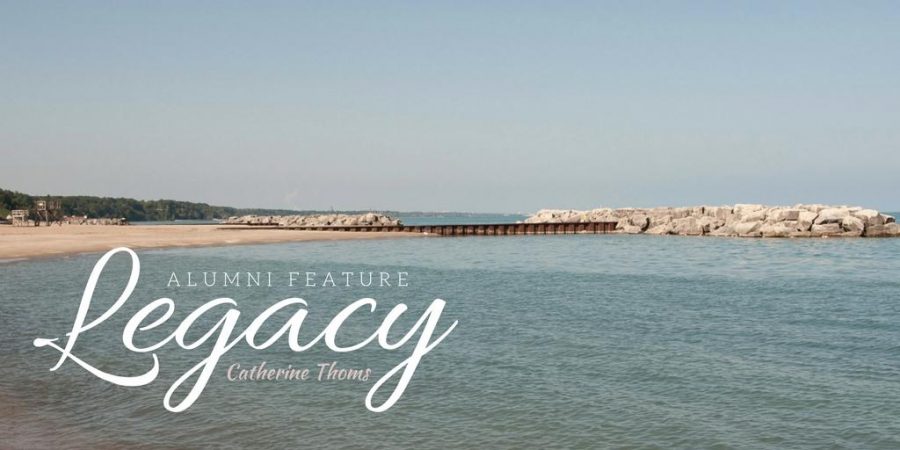 Catherine Thoms’ short story, “Legacy” was written in the spring of 2014. It was originally published in the compilation work, “Never a City So Timeless: A Walk in Lake Forest and Lake Bluff,” which was put together by Mr. Scott’s Honors Chicago Writers class.

When I was little, I hated the beach. My mother likes to tell the story of how she took me there when I was two and I refused to sit down in the sand, squatting all afternoon on my stumpy little two-year-old legs. I hated the sand more than anything, and to be honest, I still do. I hate how it gets all over your clothes and in your food, how it sticks to your wet body and crusts beneath your bathing suit. On top of that the water is always too cold, the dreaded sand always too hot and littered with various bottle caps or cigarette butts. The beach was just simply never enjoyable for me as a child, and yet, as I’ve grown older, I have found it impossible to stay away.

The view from Forest Park Beach is beautiful, of that there is no question. So beautiful, in fact, that they named a town for it. Lake Michigan to the east, forest and ravines to the north, south, and west, the very picture of picturesque. In the beginning, it was the perfect draw for Chicago’s elite looking for somewhere to spend their summers, the Chicago Tribune advertising it in 1858 as a place for people who “desire to breath…free, pure air, and drink in the sweet influences of romantic natural scenery.” And yet, today the very same people who had raised it up would be turned away at its gates. Now the beach and all its sandy splendor belongs exclusively to those lucky few who bear a City of Lake Forest sticker on their windshield; in other words, residents only.

The people of Lake Forest take a great amount of pride in claiming this stretch of wonder for themselves, going so far as to import sand so that they might have their own true beach. They have transformed the rugged beauty into a safer one, a place for them to take their young children for daytime excursions, to give way come nightfall to those who roam the shores at night, trying to pretend they are more than just larger versions of the children they were in the day. It’s a place for those who move at all paces, pushing onward with determination or simply wandering without a destination. A place where first loves and old loves can walk quietly in the evening, likening their affection to the eternal forces that govern the motion of tide.

The beach itself is partitioned into sections, like invisible lines have been drawn. To each belongs a stretch of sand, cordoned off on each side by large mounds of rocks about fifteen feet from the shore. There’s a walkway onto each of these mounds, made of metal and rising from the sand, just wide enough for a pair of feet and covered in seagull droppings. You’re not allowed to go out there anymore, but it’s where my parents got engaged. I think that’s awfully romantic, with the lake in the backdrop, and even more so now that it would be forbidden to do the same.

You walk along the stone and concrete sidewalk at the west edge of the sand to travel the length of the beach, enclosed to the west by ravines that share their names with millionaires. If you go far enough you reach a playground and then separating the beach from the docks lies a real walkway, wide enough for multiple people to walk out above the water. In the center stands a flagpole, and a telescope, surrounded by benches on a circle of stone with walls that rise just high enough for people of average height to have to stand on their tiptoes to peek over its edge. To the north, the walls give way to the boulders that serve as its foundation, makeshift steps for the more adventurous to climb and sit upon. At the end lies another rotunda, where young children delight in standing in the very center and listening to their voice echo off of its walls.

I’ve been to the beach in all sorts of weather. I’ve been when the winds roused the waves higher than most residents had ever seen; when it whipped the sand into miniature dunes like the walls of a giant child’s castle. I’ve been in the winter, when sheets of ice cover the mounds of rocks in slabs and frost the tips of the waves. And of course, I’ve been on summer nights when everything is beautiful, and a chorus of insects sings all around you in harmony with the rhythm of the tide.

I’ve been in the in-between time, too, when the leaves have just begun to turn but the early morning air that hits your skin is not yet harsh but cool to the touch, raising tiny tingling mountain ranges along your exposed arms and legs. I’ve broken the rules and climbed over boarded construction gates that forbid entrance, tiptoed past faded signs that caution me from going further. I’ve sat on the rocks in the early morning where the only witnesses to my transgressions are those I trust above all others to keep my secrets, because I know that mine are not the first secrets to which they have been entrusted.

I had never done something like that before, blatantly disobeying the law, simply ignoring it as I did. What had I to fear, the retaliation of a signpost? There was no one around to tell on me or to bring me back down. I could have danced up there, I could have sung at the top of my lungs and no one would have paid any mind. I could have stood on my hands and climbed from rock to rock like an acrobatic mountain goat. I could have jumped, and let the waves wash me out across the waters to some far-flung shore. But I didn’t; for the same reasons that had emboldened me in my small acts of rebellion were the ones that held me back. They knew where the line was drawn, that fine line of awareness that stood between the strength of my own resolve and the might of the natural world.

Instead I simply sat, and stared, and wrote. I wrote of what I saw, of what I felt. I wrote of all the things I never say but never stop thinking about either. I wrote of things that I know all people feel when they see what I was seeing, the endless expanse of frigid motion, the blue of sea and sky blending together in the distance until you are surrounded by nothing other than color, yourself being the only discontinuity in sight for miles. It’s similar to the feeling you get if you’ve ever looked up at the stars on a clear night. And I mean really looked, to the point where you can imagine everything else shrinking away into the darkness, allowing the expanse of sky to enshroud you, a tiny pinprick of light, utterly lost amongst the rest of the universe.

Surprisingly, you’d be hard pressed to find the stars here at night. Between Milwaukee to the north and Chicago to the south, the space between is coated with a layer of smog that obscures all but the brightest constellations. I remember distinctly my own disappointment at this discovery, because I had long imagined an endless display of stars extensive enough to rival the seemingly endless water.

I’m sure this once was true, only I’m afraid I’m too late to see it. I know that once there must have been the most impressive meeting of sea and sky that one had ever seen, only it was before there was anyone to see it.  Now people flock in droves throughout the year, drawn to the lake as if pulled in by the tide. The trade-off was inevitable; the stars for the sand, as more and more people desired to be closer to the lake. It’s a seemingly inexplicable desire, but understandable nonetheless. There’s relatively little to do at the beach most days other than sit and watch the waves, and yet the majority of its visitors are content to do just that, myself included. It’s something to do with the sheer magnitude of it, and knowing that no matter who you are and what you do you will never be anything but small in comparison.

It is intimidating and inspiring, overwhelming and empowering. It has been here for centuries and will be here for centuries more long after we are gone, long after there are no stars left to be seen. Forest Park Beach is as much of a legacy as Lake Forest will ever have; upon understanding this, it’s only natural that we should want to relish it while we can.