In Defense of Peaches 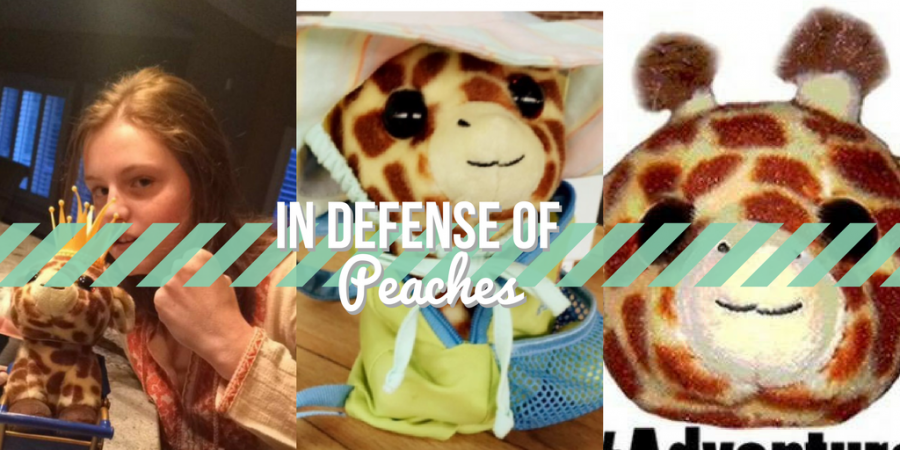 With the start of the school year came the resurrection of the Lake Forest High School snap story. For any unfamiliar with this feature, unlike personal stories, which are only visible to your immediate Snapchat friends, the LFHS story is visible to anyone within a certain geographical radius. This leads to many, many Snaps being posted throughout the day–sneak peaks into the freshmen wellness classes, group shots in the cafeteria during lunch, and close-up videos with crosshairs drawn on unsuspecting students.

This year, there’s been a new edition to the usual rotation: a small stuffed giraffe named Peaches. Regardless of how you feel about him, he has taken the the LFHS internet culture by storm. If for some reason you don’t have access to the Snapchat story, you still most likely know who I’m talking about (a testament in itself to the giraffe’s presence in this high school). Senior Ellie Thomas can be seen toting the stuffed animal around the school in a small backpack, introducing him to classes or sitting at her table during lunch.

Now, an almost 18-year-old carrying around a stuffed giraffe is bound to raise some eyebrows–but that’s the point. Ellie, a high-achieving honors and AP student who’s an avid participant in the theater program, explained the rationale behind Peaches when she said, “If I don’t have common ground with people, this is a perfect way to start a conversation with them.”

Bringing Peaches around wasn’t some grand social experiment she’d had planned for the beginning of this year. A friend, she said, saw the stuffed giraffe and picked it up for her on a whim. Given the spontaneity of it all, she’s pleased at his success: “So far, everyone LOVES Peaches.”

That doesn’t mean, however, that she’s oblivious to her so-called “haters”.
“Sometimes people point at me and whisper and giggle with their friends. I’ve gotten some weird looks and comments on it,” she said.
Perhaps owing to the confidence that allowed her to bring the stuffed giraffe to school in the first place, these comments and whispers just roll off her back.

And why shouldn’t they? Peaches is a harmless, well-intentioned, and inconsequential stuffed giraffe, and Ellie’s choice to bring it around really should not matter all that much. Though it might seem strange, of immature, or just kind of bizarre, Ellie is being herself and doing what makes her happy. In the end, isn’t that what we all want? To be ourselves and not have to worry about others whispering about it behind our backs?

In a way, don’t we all have our own Peaches, something unique to us that sets us apart from the crowd, something that is not understood by everyone but easily could be…if only they came up and asked?

Additionally, for those interested, Ellie Thomas is hosting a Peaches-themed fundraiser to benefit victims of Hurricane Harvey this Friday, September 6th, from 3:15-4:15.