Can You Believe This, Pt. 2: Ken Block Racing 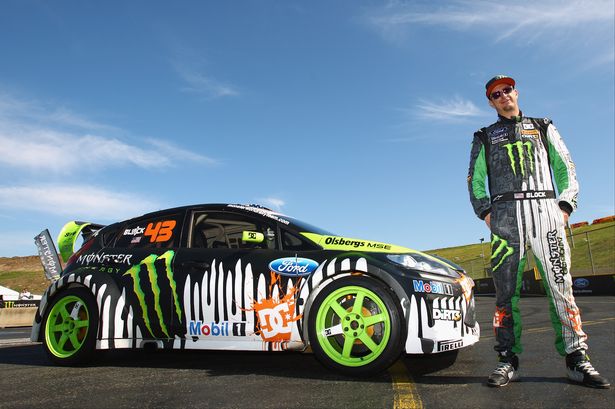 “The smell of fresh of fresh rubber, the sound of screaming engines, the sight of a Ford RS spinning around in a circle while smoke billows from its back end and the pure adrenaline pumping through your veins.”

Kenneth “Ken” Block was born in the sunny town of Long Beach, California on November 21, 1961. In 2005, Ken started his national rally career with the Vermont SportsCar team. The team prepared the future rally and drift legend for his first professional rally car, a 2005 Subaru WRX STI. His first national rally event was a snow-covered Vermont event where he ended up finishing 7th overall and 5th in the Group N class (Showroom class). During his first season in 2005, Block had five top 5 finishes and placed 3rd in his Group A class and 4th overall at the Rally America National Championship. Nearing the end of his first Professional year of Rallycross, he won the Rally America Rookie of the year.

In 2006, with his DC rally partner, Travis Pastrana (another up-and-coming rookie rally driver), Block signed a new sponsorship deal with Subaru. With the new rally season quickly approaching, the team at Vermont SportsCar built him a new 2006 Subaru WRX STI for him and his teammate. During this year he competed in the first ever X Games rally event at X Games XII. While at the event, Ken ended up placing 3rd overall for the bronze. He later went to compete in the Rally National Championship where he placed 2nd overall.

2010 was another big year for the Professional Rally Driver as Block ended his long lasting relationship with Subaru and moved on to Ford (his old partner Travis Pastrana stayed with Subaru), where he signed a new sponsorship contract with the legendary Rally team.

Also, his previous sponsors, BFGoodrich and Motul, were replaced by Pirelli and Castrol. On January 6, 2010 Ken drove selected rounds of the World Rally Championship for Monster World Rally team, in which his Brand new Ford Focus RS WRC 08 was run by M-Sport. During this year he also participated in his 6th event in the Rally America Championship in an open class Ford Fiesta, as well as his 5th X Games event. On February 27th, Ken won the Rally America in the 100 Acre Woods for the 5th consecutive time. This win broke the previous record, held by John Buffum.

Fast forward to 2016. On March 3rd, Ken, along with actor and television host Matt LeBlanc, performed a Hoonigan Media video in London. He was featured doing donuts and drifting in Cenotaph War Memorial in his completely custom Ford Mustang. This year he will be competing full time in the World Rallycross Championship for the 2016-2017 season. While in Germany, he also placed 3rd in the super car final and got his second podium win in the series.

There you have a little insight into the life of Ken Block. Now to break down the video that his company, Hoonigan Media, released on September 13, 2016. Block started this company in 2011 and has built it into a full fledged film and racing/clothing store. Through the years, Hoonigan Media has released countless videos of Ken ripping up the street ranging from LA to Dubai.  This video though, in my opinion, tops them all.

The start of the video previews Ken getting into his Monster sponsored Ford focus RS. After pressing the ignition, the roar of the engine starts up and he places the car into 1st gear. He holds it at 3000 RPMs and by “snapping” the hand brake (holding it and then releasing it quickly) starting a massive burn out into the first corner. Into the first corner he gracefully brings the back end of the car around the corner and the wheels squeal (1:10). After the first corner, Block races into a large roundabout and drifts around the circle with ease (1:38) making it look like anyone could do it. Following the round about, he makes a hard 90 degree drift turn on a gravel road. Almost losing the turn, the back of the car dips into the bushes but he manages to pull it back and continues on the course. (1:50)

After the gravel road comes the donut drift around a wooden wheel. This driving is nothing short of spectacular as the driver donuts around the wheel, inches between the back barrier and the back of his Ford Focus to separate him and carnage. (2:00) After ending the multiple donut drifts, he proceeds to race down a tunnel where he makes a hang pin turn around a corner back into the other side of the tunnel. Making it look easy, Block could have easily spun out during this turn and crashed, but with skill and precision he needles his way back into the tunnel, making the mind of any gear head blow. (2:25) After a couple good drifts around the course, Block moves onto a paved road while racing a train to the tracks. The driver makes a hard right hook over a hump in the train tracks and drifts around the train coming a couple of feet from the front of a moving freight train. This is nothing short of a daredevil act which shows the pure, raw talent of Block’s driving capability. (3:00)

Proceeding the train drift jump, he turns into a nice dirt road drift and then into a rear entry drift around a corner. (3:27) With the wheels burning and the engine roaring, Block moves onto a perfectly executed 270 degree drift into an empty building and guns it out the other end. (3:37) After exiting the abandon building, Block follows up with yet another donut drift around a couple barrels but with a twist. On one end of the donut drift area is a drop into water. After the first donut, Block literally drops the back end of his car off the edge of the drop into water. This is textbook driving that could only be recreated by Block himself. If the car was moved by less than a foot, his Ford Focus RS could be underwater at this moment. (3:54) Following this he peels away into a long stretch and the engine roars alive. (4:18)

Immediately after Block takes a hard right drift he then jumps into another classic donut drift around a barrel, coming inches from a metal divider. The sparks fly from the back of his bumper as it gracefully brushes against the metal divider. (4:42) Then, he parlays his driving into a long sideways drift, the smoke spewing from his tire bay. (5:00) Following this, Block shifts into 4th gear and begins to drift around a Ford truck lifted by a coastguard helicopter.

If this doesn’t prove his capabilities as a driver, then nothing will. The teamwork between the helicopter pilot and Block had to be on point. If not, it would result in catastrophe. Block donuts around the truck multiple times before pulling out and continuing on to the end of the course. (5:15) After a hard left drift, Block drives up onto a liftable bridge where he started to donut and figure eight. (6:20) Figure eight after figure eight after donut after figure eight, Block continues to showcase his pure talent while the bridge is lifted.