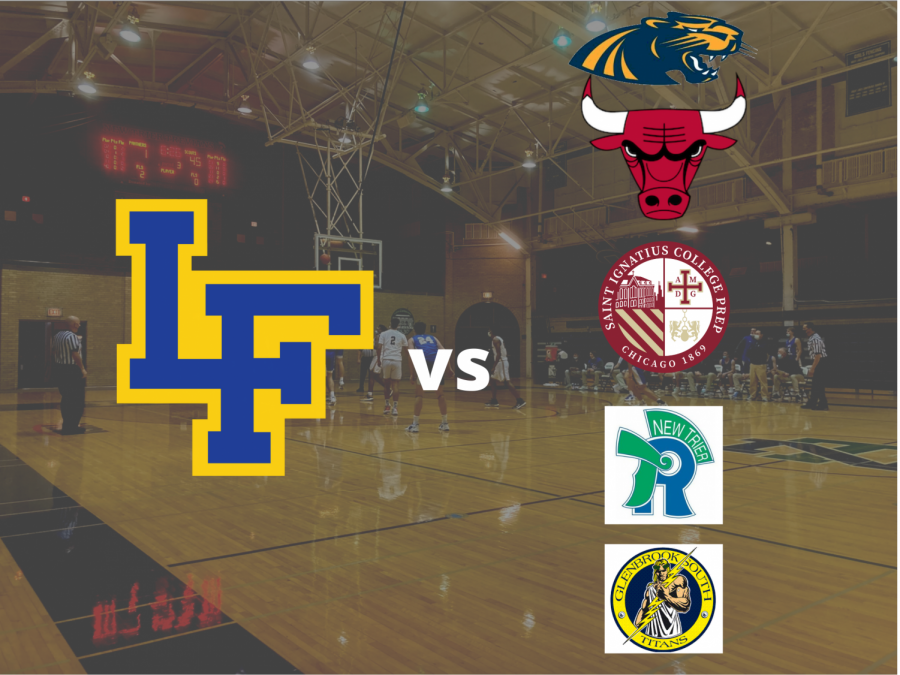 WILMETTE, Ill. — After four tough matchups in the annual thanksgiving tournament, the Scouts came up just short, losing to New Trier 51-41 in the finals Tuesday night.

In round one, the Scouts routed the Round Lake Panthers 69-21. That coverage can be found here. In round three, however, the Scouts matched up with the 4th best team in the state, the Saint Ignatius Wolfpack.

It was definitely the most exciting basketball game of the young season. The away stands were packed but more and more Lake Forest fans were showing up as the minutes passed. The momentum started for Lake Forest after a couple charge calls, and after two back to back threes from Asa Thomas the Scouts were up 13-5. Ignatius needed a timeout.

The Scouts stayed on top for the majority of the contest, with Ignatius star Richard Barron dropping 32 points and 7 threes, carrying them for as long as he could. Senior Sam Gibson was sent to the free throw line in the last minute and a half, hitting two clutch free throws and ultimately winning them the game 62-60.

“One of the guys nailed my funny bone on the foul, so I was even more worried about the shots, but I just had to breathe and focus on the rim,” Gibson said.

Their first top win of the season against Saint Ignatius came just a day after they played Bulls College Prep in the second round of the tournament. Asa Thomas put the state on notice, if they weren’t already watching, as he dropped the first 40 point game of his high school career. He led them to a 78-25 victory. Senior Alex Forowycz dropped 14 points, and Gibson had seven points and seven assists.

In the final game of the tournament, as the Scouts sought their first Thanksgiving tournament title since the Evan Boudreaux era (2013). They matched up against the number eight team in the state, New Trier.

The Scouts got off to an extremely slow start, going down 0-12 in just 6 minutes. They attempted to rally back with buckets from Alex Forowycz and Sam Gibson, but they just couldn’t seem to find their footing. A quick turn around mid-range shot from Thomas instilled some hope in the fans in the first half, but a buzzer-beating two from New Trier ended the half. The score was 14-24, with the Trevians on top.

The third quarter began, and both student sections were rowdy, chirping and shouting from opposite ends of the gym. Both teams had quick buckets and fast gameplay followed. The Scouts had their highest scoring quarter yet with 11 points, but New Trier still led 36-25.

Another high-scoring quarter ensued, with 5 points each from Thomas, Forowycz, and Gibson, but hope-crushing dunks from New Trier finished off the tournament.

Overall, the Scouts showed the rest of the state what they were made of, beating a top four team and destroying two others. A close loss with the Trevians will surely fuel their motivation for the coming games and for the rest of the season.

Unfortunately, this momentum couldn’t carry over to Tuesday’s matchup with the sixth-ranked Glenbrook South, as the Scouts fell victim to Cornell-commit Cooper Noard and the rest of the GBS squad with a final score of 71-54.

After going down 10 points early in the first half, the Scouts couldn’t seem to gain enough traction to make a run against the stout GBS defense. Senior Alex Forowycz and Thomas did everything they could to cut the lead down, scoring 21 and 18 points, respectively, but it simply wasn’t enough.

The Titans seemed unable to make a mistake, and while the Scouts’ mistakes were few and far-between, the Titans almost always found a way to capitalize with a quick three-pointer or layup off a steal.

Look for the boys to rebound on Saturday at Libertyville at 5:30 p.m.