Brickman on the Bachelor: Week 3 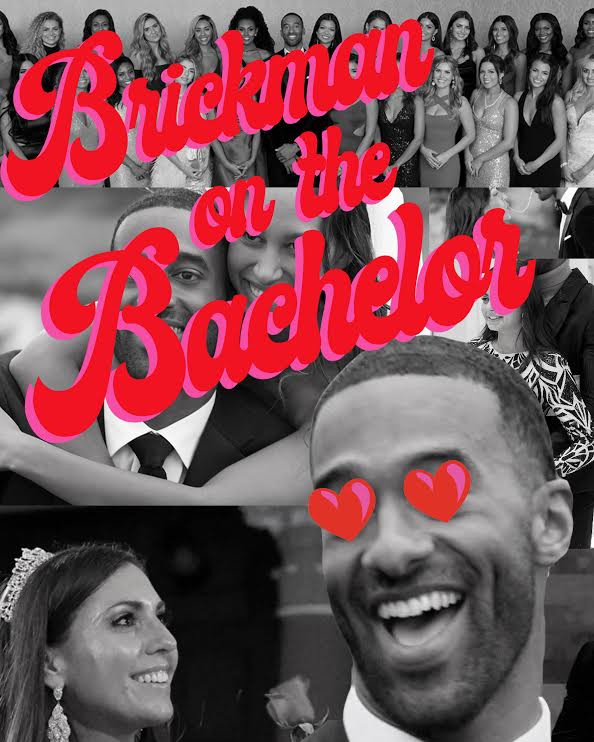 The Bachelor always serves the best drama, and I can't get enough of it. #tea

The following is a recap of the most recent episode of ABC’s “The Bachelor.”  All opinions stated in this piece are that of the author’s.

Already week three of this season and honestly Michelle has done a great job of weeding out the weirdos and the jerks. Still, a little shaken up from the jarring convo with Jamie about the men all supposedly doubting her character, Michelle is off to the first group date of the week.

The Bachelor may feel very smooth, but their product placement and advertising could use some work. The first group date was themed to promote the second Top Gun movie and was hosted by two of the actors in the upcoming film. I thought this date seemed a little too familiar and as I was scrolling my Bachelor-themed FYP on Tik Tok, it hit me – this date was repurposed from Peter’s season of the Bachelor.

Before any activities started, the actors only thought it made sense to nickname the men on this date. Can’t start the date without some embarrassment first right? Will gets the very masculine nickname of “Lil Willy.” Martin becomes “Frosty,” paying tribute to his frosted tips, and Peter the pizzaprenuer gets called “Doughboy.”

The men are put to test with a pushup contest while Michelle awkwardly sits on their backs. Martin pulls her aside afterward to ask Michelle how she is feeling after the drama last night. She really takes this to heart, as does every Bachelorette when a guy pulls them aside. Personally, I think Martin has made some questionable stylistic choices but seems like a relatively level-headed guy.

Another repeat from the original Top Gun date is the G-Force spinning machine thing. One of the many reasons you will never see me on the Bachelor series is activities like these. Being hooked up to a machine and spinning very fast while also being asked to confess everything I love about a stranger I just met? Not my forte. I mean these poor men. They all look terrified, and at some points even nauseous. It felt like an invasion of privacy just watching this disaster unfold.

Peter, or “Doughboy,” decided to try and impress everyone by talking in Italian. Will gets hooked up next and decides to speak in Spanish to impress Michelle.

The next challenge was “Dog Fighting,” which was again really just uncomfortable watching these quirky guys try to like truck one another. Of course, Peter and Will (the only two people beefing) were paired together. You would think that this would be the smackdown of the year for Bachelor Nation, but nope. Will destroyed Peter, pushing him off the elevated mat every chance he got – even to the point where “Doughboy” had to put his arms up and basically say, let me back up.

Will ultimately wins the date and, instead of a trophy, someone decided that a fitting prize would be a bomber jacket that I swear to god I saw at Forever 21 in 2011.

On to the afterparty. Clayton got a little more screen time- but for someone who is supposedly the next bachelor, I don’t see a whole lot of personality. Michelle is off mingling with the different men, when suddenly production cuts to Peter and Will full-on yelling at each other.

By now, I feel like we have seen more of them than the actual bachelorette. The two argue like middle schoolers going back and forth with Will calling Peter a “Pizza boy” and Peter replying with “You should see the checks I cash.” Peter, I cringed watching that and I just cringed again writing it. The argument ends with Will making the mistake of pointing out who won the bomber jacket and leaving to talk to Michelle.

Peter launches Will’s jacket into the pool and all you hear is Nayte yelling, “WHY? WHY THOUGH?” And honestly, I am asking myself the same question.

Meanwhile, Michelle is having a grand old time, just casually making out with maybe like six different people.

Not wanting to ruin the night, Will doesn’t bring up the jacket now floating in the pool. Really took one for the team there. He did, however, proceed to cry and take his moment away from the group. On top of the entire night and everything that happened – he didn’t even get the date rose. Some rando Brendan did.

Next up we have Rodney’s one on one date. Rodney on night one showed up in an apple costume, so now it’s hard for me to see him as anything else. Their date was pretty packed for a one on one.

They first played a few rounds of truth or dare which involved different rounds. Some were eating challenges, one was a deep convo about biggest fear, one round Rodney had to streak across the entire hotel – which the other men made sure to come and watch. Again, adding that to the loss of reasons I will never go on national television.

They then took a boat ride across this little koi pond to dinner and continued to share more about themselves. They talked more about their childhood and what it was like growing up. Unlike Michelle who always likes to highlight that she grew up with parents who decades later are still in love, Rodney grew up with a single mom who worked THREE jobs. The two had a heart to heart about their hardships growing up, and I’ve grown to look past Rodney being the “apple” guy. Michelle ends the night by offering Rodney the rose to say, “Would you apple-loutely accept this rose?”

The final group date of the week was very lowkey and drama-less. The date card read, “Jamie, Leroi, Chris G, Casey, Mollique, Chris S, Brandon, Romeo, I want a man who can express himself.”

Not too much went on at this date, and by “went on” I am talking about drama. Which was honestly a nice break, I mean makes my job easier by not having to try and dictate another petty argument

Each man was sent into a quiet spot to take some time and write a poem he was going to present to the group. Jamie however decides he is just not going to participate. Why? I have no idea. Does he think is above everyone else and doesn’t have to write a poem? Jamie is really starting to push my buttons – Peter is too, but he is clearly only on the show for ratings.

Michelle hits it off with Brandon at the night portion of the date and gives him the rose. Jamie is shocked, thinking that he is the epitome of bachelorette men’s standards.

Leaving the date Jamie pulls a producer aside and basically throws shade on Brandon for getting the rose, commenting on how shocking it was. You don’t often see the contestants interact with the crew, so this was definitely weird.

Back at the resort, the men start to put two and two together that Jamie is the source of all evil. Jamie catches himself in a lie with Michelle and the other men, getting exposed and hopefully embarrassed. The men admit that they were never threatened by Joe like Jamie had accused them of being.

Michelle is standing there, confused, angry, probably exhausted, and walks Jamie out the door. Good riddance.

At the rose ceremony: Joe, Rick, LeRoy, Nayte, Casey, Chris G, Chris S, Clayton, Olu, and Romeo all get roses. Everyone rude is gone and this is the first time that I can think of where the lead hasn’t let production convince them to keep the ride people on for longer. Go Michelle!