Student Athletes and Mental Health: When is a sport taken too far?

High level student athletes share their experiences with balancing their sports and academics. 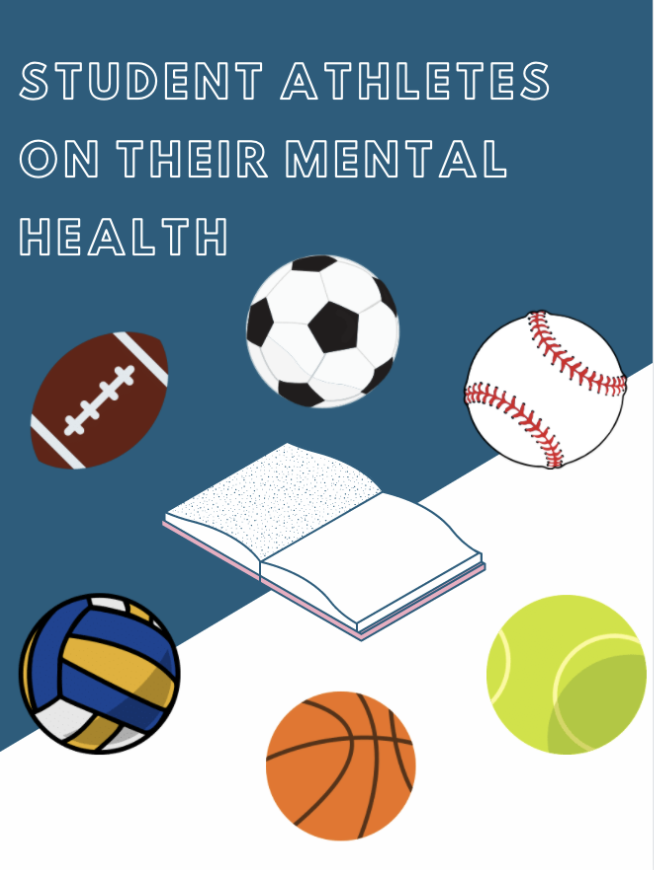 Junior Asa Thomas found himself on the Varsity Basketball team as a mere freshman. As an underclassman playing at such a high level, Thomas was tasked with upholding expectations of performing well on the court. But he was met with challenges that extended beyond just the physicality required.

“Basketball is a mentally challenging game in many aspects,” Thomas said. “If you miss a couple shots you have to be able to keep a strong mindset and stay confident in your abilities.Then there are the outside challenges that play a role in your sport.”

Pressure and stress off the court can mess with an athlete’s head, he said.

“If you aren’t doing well in school, or if you have a problem with a friendship or family, that can also affect your mental state which leads to poor play on the court,” he said. “Half the battle with sports is the mental aspect. If you have a strong mental ‘game’ then you can thrive both on and off the court.”

In the past few months, high-profile mental health issues with Naomi Osaka and Simone Biles have sparked debate over how to handle sports and mental health. Like many communities, LFHS celebrates its hard working, talented athletes. However, with the athletes also being students, the very busy schedules can be hard to manage.

“A number of athletes from different sports around this school will come into my office, especially when there are challenges of expectations between academics. And, if they are high level athletes, the time crunch can be really demanding,” social worker Daniel Maigler said.

Deadlines and getting good grades are all on students’ priority lists, but when combined with the anxiety and stress that comes from sports, it can take an even larger toll.

“There’s definitely the want to do well in both so it takes a lot of brain power and mental strength to try your best throughout the whole day,” Varsity tennis player Lainey O’Neil said.

Athletes are often pressured to push themselves to keep going even when they’re running low on energy. The need for an athlete to sustain their energy throughout the entire school day and into practice or a game can be incredibly difficult; finding a time to do everything they want–including basic self-care like sleeping–can feel nearly impossible.

Emma Stadolnik, a sophomore on the Varsity volleyball team, said she struggles to find a balance with sleep, academics, and athletics.

“Most of the time, after you come home from practice, you have a ton of homework. You don’t end up going to bed until like 1 or 2 a.m. It turns into a lot of stress trying to get enough sleep to fuel yourself for the next day,” Stadolnik said.

Very competitive athletes tend to get in their own heads, which can sometimes drive them to push themselves beyond their reaches.

“They drive themselves so hard, harder than they possibly should. So, the very people who seem to others that they are doing incredibly well and accomplishing everything are also dealing with a bunch of mental health issues,” Maigler said.

The stress that comes with playing a sport can sometimes prompt athletes to eventually lose their love for it. Being able to step away is a good way to rekindle an athlete’s relationship with their sport.

“There are also times during the years that you just need to take a break to recharge your batteries,” Thomas said. “That is a crucial aspect to my mental health for basketball. Just being able to stop and take a second to breathe when I’m going 100 miles an hour is always necessary.”

There is a danger to playing a sport for the sole reason of seeking to prove something to yourself or others, instead of using it as a healthy coping mechanism.

“When the sport is being used as an outlet for that person’s energy, it’s great. But, when it is a need to “please,” that’s when it becomes toxic,” said Maigler.

Sports do not have to be all negative, however.

“It gives you a safe space everyday to go to, and you know that you have people that care about you,” Stadolnik said. “And, exercising definitely helps take away the stress of the day and gives you time to not think about school for a while.”