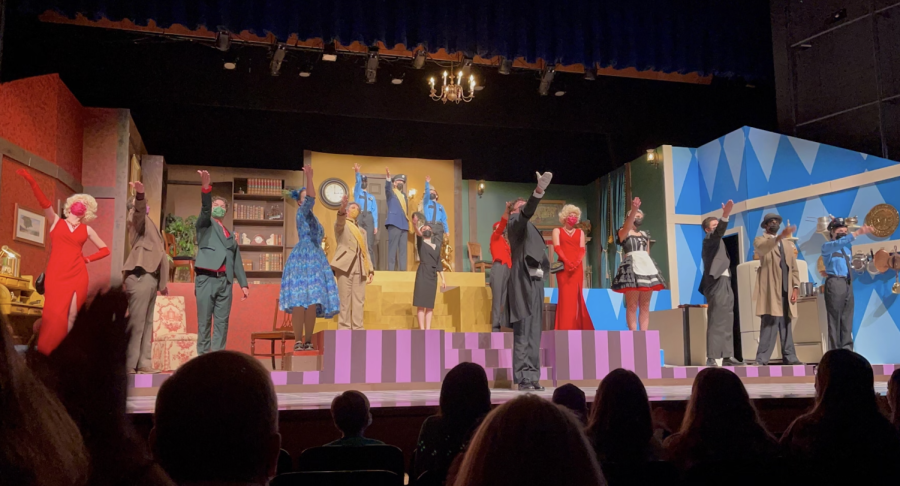 Earlier this month, the LFHS Theater Department put on a production of Clue. Based on the much-loved board game and the cult-classic film, it was a perfect way to usher in autumn and to go support many hardworking students both on stage and backstage.

The sheer amount of work poured into this show was obvious from the acting, to the set, to the many tech ques. Stage crew and actors alike would stay late after school rehearsing and building tirelessly to make the show as good as it could be. Their hard work paid off with a well-attended theater all three nights of their performance.

“I feel like we worked really hard for a really long time, and it really paid off, ” junior Fox Duelli said.

His sentiments are definitely shared with the rest of the group. Their time commitment even prompted Forest Scout writer Saige Joseph to wonder if kids in the show deserved a “theater study hall” similar to those of student athletes, as they were putting in an equal, almost exceeding amount of time into the show.

Director Joe Pulio feels an immense amount of pride. He had wanted to do it for a long time, and this year was the perfect opportunity.

“I was really proud of . . . the timing, the tech. I mean, I was just proud of the kids, all of them, like both actors and tech,” he said. “They just rose to such a level of professionalism, it was so clean. It was like watching a piece of artwork. I don’t think they even realized the quality, it was so incredible.”

Pulio has a reputation for putting on amazing shows that exemplify the talents of his actors. He pushes hard, but he gets results, despite many challenges of the show.

“The sound, the lights, having people dragged around on stage, having a chandelier fall, people falling out of refrigerators, trying to figure out how to get knives in people’s backs, that was all really hard,” Pulio said.

From the audience’s perspective, the Theater Department’s dedication was obvious.

“I really liked it,” junior Grace Thomas said. “They just did such a good job.”