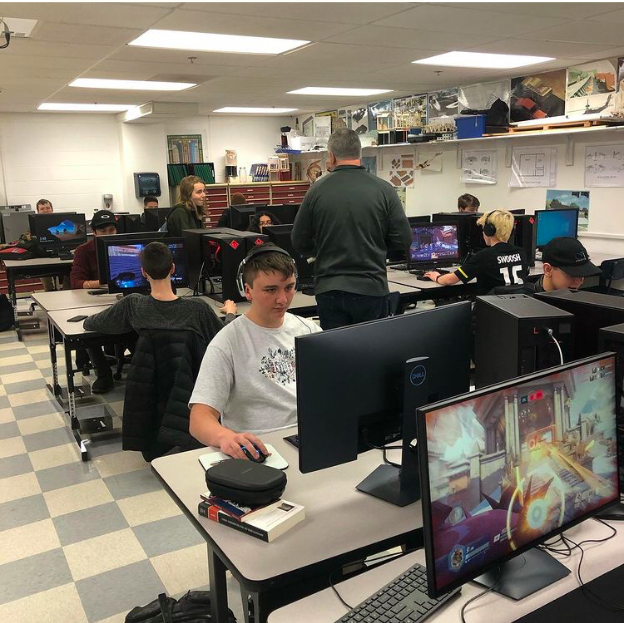 Most people play video games as a hobby, but for some, it’s more than just a game.

Members of the eSports team devote a significant portion of their time to improving at competitive video games. To those players, video games are just as important as any other sport.

These students are a part of Lake Forest’s eSports club, a collection of people who compete against other schools in video games to see which school has the biggest eSports talent.

The eSports club is a collection of different teams who compete in 8 different games against other high schools. Each team practices for at least five hours a week and has tournaments and scrimmages weekly.

Practices take place in the CAD lab throughout the entire week, with each game having its own time to practice on the computers. Just like how other sports teams come together to practice drills to outperform the other team, the eSports team practices a multitude of abilities together such as mechanics, communication, and awareness.

Each game has its captain that has been voted upon by the members of the team. Whether the captain is chosen for their talent within their game or because they have the true personality trait of a leader, the captains are in charge of making sure their team isn’t falling behind in their performance. Captains make sure to get their players into scrimmages and matches on time as well as making sure their players are spending time outside of their designated practice times to improve.

Particularly for captains, eSports are so much more than a game. Senior Alex Salkin, captain of the Overwatch, explained that before becoming captain, he didn’t take video games very seriously. He would play them when he had free time but he never felt a need to play a certain amount every week. However, after joining the team he now treats playing games just like any other responsibility.

“Before joining the eSports team, I didn’t really have time to play games. I would play maybe two hours a week,” Salkin said. “After I became a part of eSports, I had to make more time for it.”

At the beginning of this school year, Science Director Dr. Abrams took over as coach of the eSports teams.

Abrams is a competitive gamer himself and competes in Clash of Clans world eSport tournaments. He said he enjoys meeting more students and having a bigger influence on their lives. He likes creating a space for those students to be themselves and feel accepted through the eSports club.