Scouting Out The Scouts: Maggie Volpe 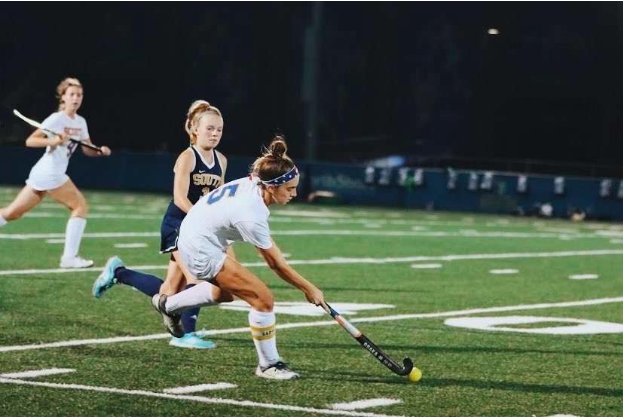 Each week Scouting out the Scouts will profile one successful athlete. Last time, we checked out Jack Rice’s success.

Since 2008, the Lake Forest Girls Field Hockey team has won 5 state championships, making them one of the most successful programs in our school’s history. In 2021, the team is ranked number 1 in the state and playing exceptionally well.

On Friday, the Scouts took home the sectional title with a dominant 7-0 victory over Evanston. Putting up an incredible 21-3-1 record thus far, there is a lot of pressure on the ladies to win a state championship, according to senior captain Maggie Volpe.

“There have been extremely talented players that have played for this team, and I think that making the alumni proud is one of the things that is the most pressuring to me,” Volpe said. “We also have two amazing coaches who have guided the team along these years, so there is a lot of pressure to prove to them how much we really want it.”

Volpe, a 3-year varsity starter, has been an essential piece to her team every time she touches the field. This season, she leads the team with 204 steals while also putting up an impressive six assists and six goals.

Not only is she a star on the field, but she is a great captain who is beloved by her teammates.

“As one of the captains, Maggie sets an example to everyone else on the team everyday. I’ve never seen Maggie not giving one hundred percent effort at any practice or game. She’s always ready to go and has everyone’s back,” teammate Heidi Richardson said.

Of course, in 2020, the pandemic affected many people differently. For Volpe, it affected her recruiting process.

“The recruiting process was something that I struggled with. I had always wanted to play Division 1 Field Hockey and was being recruited by those types of schools. But when Covid hit my junior year, it really affected my recruiting process and made me fall behind. All the schools I originally wanted to play at filled up their rosters with girls that lived in places where they were able to play field hockey in the fall of 2020, whereas in Illinois, we still weren’t able to,” she said.

But in September, Volpe announced her commitment to Depauw University.

“I am a firm believer that everything happens for a reason and when I commited to Depauw, there was a lot of weight lifted off my shoulders and I was extremely happy with my decision. It is a really competitive team and I love how close to home it is.”

Catch Maggie and this great team in the state semifinals today at 5 p.m. against Oak Park River Forest at New Trier.