‘It Sucks To Go Out Like This’: Scouts Fall to Stevenson in NSC Tournament Semifinals 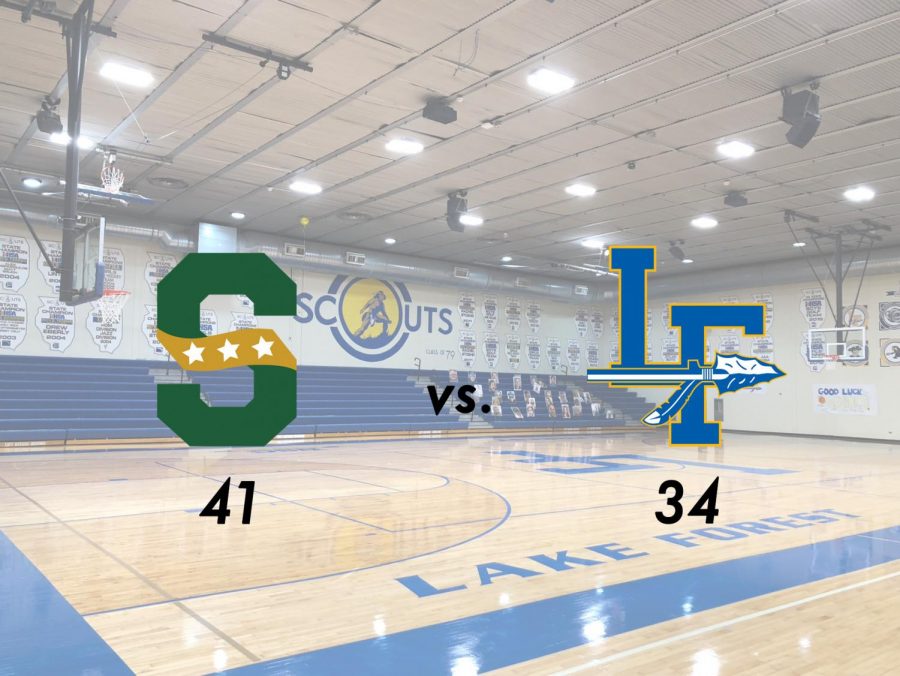 Not even a pandemic can get in the way of those three inevitabilities, especially the last one.

Through all the turmoil of the past year, and the uncertainty over whether Illinois would even see a high school basketball season, maybe we should’ve expected one thing to stay the same: Stevenson won’t settle for anything other than first place.

The Patriots, seeking out their ninth straight conference championship, ran into the Lake Forest Scouts on Tuesday night in search of their seventh straight win and a ticket to the North Suburban Conference tournament final on Friday.

After a close start that even saw Lake Forest take a three-point lead, the Scouts never led after halftime, stymied by an unassailable second-half performance from Stevenson that featured clinical offensive execution and defensive prowess en route to a 41-34 loss.

Then, it was Jalen Brunson, Justin Smith, and Connor Cashaw. This time, it was Evan Porto, Jared Evans, and Andrew Chieng.

“Yeah, they’re good,” said Lake Forest head coach Phil LaScala. “They’re the team to beat a lot of these years. I thought going into today, I was very confident in our game, but this was just one of those games where they played better than us.”

Neither team could break through early, as two layups from Jack Malloy and a free throw from Cade Nowik gave the Scouts a paltry 5-3 lead at the end of the first quarter.

Both teams slowly broke out from their sluggish starts, trading the lead several times over the course of the second quarter. A three-pointer from Nowik with just over a minute left to play buoyed a 13-10 Scouts lead at the half.

The Patriots (12-3, 5-3 NSC) finally found their footing in the second half, as they went on an 11-1 run that was punctuated by an Evan Porto three-pointer.

To stop the bleeding midway through the third quarter, LaScala called for a half-court press, which was the one time all night when the Patriots seemed perturbed.

When pressed by Malloy and Walt Mattingly, Stevenson guard Andrew Chieng panicked, throwing the ball out of bounds in an effort to ditch the ball to a teammate.

The turnover set up a chance for Mattingly to drive to the basket and score, cutting the Stevenson lead to six points.

On the next Stevenson possession, Porto was again flustered by Mattingly and Thomas, and chucked the ball out of bounds at the other end of the court.

“I don’t think they saw it coming at all,” said sophomore guard Asa Thomas. “We trapped them real quick, got some quick turnovers, got some buckets off of it, [but] it wasn’t enough.”

As soon as the Patriots acclimated themselves to the press, the Scouts struggled to stop them by any other means. Meanwhile, the points kept pouring in from the Stevenson offensive ensemble, giving the team a consistent buffer from the Scouts, who never led in the second half.

Junior guard Jared Evans, who finished the night with ten points, was the only Stevenson scorer in double figures. Junior guard Evan Porto was close behind with nine points and five rebounds, while senior center Darius Clemons chipped in six points and seven rebounds.

Flashes of momentum — like when Mattingly rattled home a dunk or Malloy hit a crucial three-pointer — dissipated as soon Stevenson was able to return the favor on the other end of the court.

“We did a good job of executing, [but] we just couldn’t get anything going on the offensive end,” said Thomas. “The shots weren’t falling for us, and that’s how it went down for us.”

The Patriots seemingly had an answer any time the Scouts tried to rally back, as they held Lake Forest to a season-low 34 points on the night.

“I thought Stevenson did a great job defensively on us,” said LaScala. “They really came out with a ton of energy and sort of set the tone. We just couldn’t buy a bucket. Every time it seemed like we had a little run, they had a big play and came right back.”

Senior Will Thomas scored four points with under two minutes to play to make it 37-34 Stevenson, but his contributions were canceled out by a late floater from Chieng and two made free throws from senior Jacob Morris.

Malloy’s 11 points and Mattingly’s eight-point effort weren’t enough for the Scouts, who fell 41-34 to Stevenson. They got few looks beyond the arc, and Asa Thomas never got going offensively, two factors that often spell doom for the Scouts.

After such a strong season, Tuesday’s result was a hard note to end on, especially for the upperclassmen on the team.

“I feel for the seniors, man,” said Asa Thomas. “They’re some of the greatest guys I’ve ever met in my life.”

What’s Next?
Now eliminated from the conference tournament, the Scouts’ most meaningful games are behind them. LaScala talked about the possibility of playing a third-place game, given that there’s one more game on the team’s calendar, but the details have yet to be worked out, and it’s unclear who they might play. After the game, several members of the team seemed to support the idea of playing another game.

The Patriots will now set their sights on Friday’s NSC Championship Game, where they’ll take on Libertyville (6-7, 4-3 NSC) at Woodlawn Middle School in Long Grove.