Testing During the Coronavirus

Being a student is more chaotic than ever, but testing remains the same. 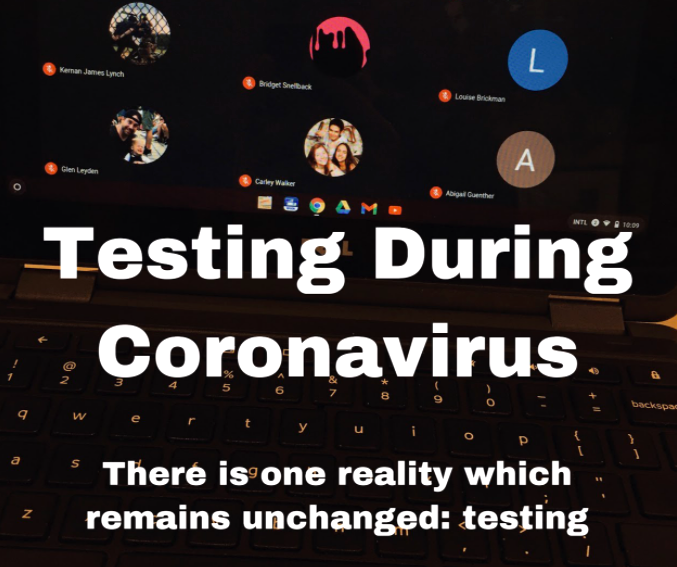 Being a student today is more chaotic than ever: learning has been upended, most teachers are online, and with coronavirus cases skyrocketing, the school has been shut down again.

However, despite the unpredictability of being a student, there is one reality that has remained largely unchanged: testing.

In virtually every class, students are tested on the same material that they would cover in school — despite being in an online format. For many, this discrepancy between the realities of remote learning and the curriculum has led to greater stress in a time where anxiety has become the new normal.

“Personally, getting tested on material that I learn online has only added to the overwhelming feeling of stress I face day today,” said senior Tegan Heswall.

It is undeniable that, under the online schedule, students are receiving less time to learn than they did while in the classroom. Before remote learning, students had a total of 1,720 hours of learning per week, with three Scout Days and two block days according to last year’s school schedule. Today, with four block days and 30 minute periods on Wednesday, they have merely 1,520 minutes per week — 200 less hours to get the same amount of work done.

In short, students today cover the same material, while online, with less time.

“I think testing is a bit all over the place,” said senior Natalie Waite. “I also think teachers will brush on topics during class, then leave the homework to explain the rest — but then you get kids who don’t understand all the way and it’s difficult in class to get a question in.”

According to many of the student body, the results of these expectations are clear.

“On my last math test, apparently everyone failed. In part, it was because what was on the test was so confusing and unlike what we learned,” said one student, “It was like learning ‘what is 2+2’ in class and answering ‘what is ½ times ⅜’ on the test. This is very different, and is clearly unfair.”

However, while testing and learning in some classes may be difficult under the current online schedule, for others, the learning has been much more positive and effective.

“Testing during e-learning is pretty difficult, but it depends on the teacher,” said Medica, “The majority of my teachers have been doing a very good job with testing.”

Beyond the current realities of e-learning with less time, learning resources — such as the MRC, HRC, and PLT time with teachers — are less effective than they were in person, making it more difficult for many students to have their class questions answered.

“As someone who has attended PLT almost every week since freshman year, I used to really be able to get that one-on-one time with my teachers,” said junior Christina Carris. “It gave me the chance to work with them on study guides, expected test materials, as well as test corrections. With online PLT, I am unable to get that one-on-one time to the same extent that I used to.”

With the reality that students will be fully remote until at least Thanksgiving Break, it is clear that — for students to succeed in this chaotic environment — the current system of learning and testing must be adjusted.

“I feel like teachers still may need to work on the mindset that, with e-learning and hybrid, you can’t push time crunches so hard,” said senior Natalie Waite. “Trying to get the same amount of work done with less time “will only result in stressed students and lower grades.”

In these difficult times, it is critical for administrators, faculty, and students to closely work together. Like how all aspects of life have been upended over the past eight months, it is increasingly clear that testing must change as well to improve everyone’s learning experiences.