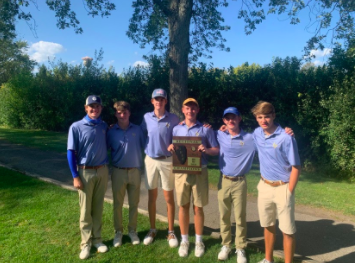 After securing first place at the Conference championship last week at Willow Glen, the boy’s golf team traveled to Deerfield today to take on Regionals at Deerfield Golf Club. The Scouts came back with a win by 22 strokes over Stevenson and minds focused on the Sectional championship next Tuesday.

Leading the way for the Scouts was junior Jack Marshall, charting a jaw-dropping 66 on the scorecard.

With seven birdies and just one bogey, Jack came in first place in the tournament by a margin of seven strokes.

“[It felt] like a million bucks,” Jack said after the round. “Gained a lot of confidence with the putter early and then I didn’t miss on the back…I knew it was my time.”

The final leaderboard had a lot of Lake Forest names on it. Senior Flynn Bradley came in second with a +1 73, and seniors Will Webb and Colin Jasper tied for third with a pair of 75s. Also in the top ten was senior Pierce Grieve, with a score of 77.

It was a beautiful early October day for golf in Deerfield, and the conditions were not too tough for the Scouts.

“Overall it was a good day on the course,” Webb remarked. “It was a little windy but not too bad and it warmed up really nice outside.”

With regionals in the rearview mirror, the boys now look to Sectionals next week.