A Senior’s Thoughts On a Drive-Thru Graduation

While a "drive-thru graduation" may be a necessary solution down the road, it should never immediately pose as a replacement for the traditional one — because it's just not.

NOTE: Since the publishing of this column on Friday, May 15, LFHS has reinstated the backup dates of July 18 and August 1 in case health guidelines allow for an in-person ceremony (per announcement on May 19). If ultimately allowed in the future, this will be held in addition to the already-scheduled drive-thru commencement on June 6.

On May 13, caps and gowns were to be delivered to the doorsteps of this year’s graduating seniors. Upon receiving mine at my door, however, the thought of not being able to celebrate this achievement by walking across that stage was at the forefront of my mind. The Class of 2020 has had a rocky last semester that in no way is what you would want to sum up your years in school.

Yet somehow, with privileges and senior rights of passages being taken away left and right, it seems the news only got worse. LFHS Principal Dr. Chala Holland sent out an update regarding the class of 2020’s graduation ceremony and the further I got into the letter, the more my heart sunk. With this new plan, will I be able to physically walk across a stage? Yes. But will that represent anything other than a cheapened version of a ceremony so special and impactful in every Scout’s life? Unfortunately, not at all.

Many senior rights of passage were ones I was able to cope with giving up through justification of safety. While I looked forward to running around the streets of Lake Forest and Lake Bluff with a nerf gun in hand, being clapped out, having first dibs on the food trucks on e-day, going to a Cubs game on ditch day, and coming up with a class prank — not partaking in those activities means that things will go back to normal sooner, and those we love will remain safe.

The possibility of graduation not happening, however, never wavered in my mind until Wednesday. Being able to walk across a stage in front of the building that has shaped me into who I am and the people that got me here is the one thing that I will not sacrifice, even in the face of this pandemic.

LFHS had three backup dates booked for graduation; one in June, one in July, and one in August. Knowing that information, even in the face of this pandemic I had no doubt that I would eventually be able to receive my diploma in front of my peers and loved ones that got me to where I am.

Originally, communications with the LFHS community about their process explained their original philosophy behind the creation of many virtual substitutes. LFHS was prioritizing that those events actually would be honored and held in some form rather than extended out with backup dates that may ultimately all fall through, leaving us with nothing as it would be too late — a perfectly respectable viewpoint for most events. Graduation, however, was always deemed the exception due to how special and important it is.

Even with a virtual substitute on June 6 put in place in the May 4 announcement to compensate for possible later cancellations or students leaving early, the backup dates remained hanging in the future as reasonable hope for a traditional ceremony to be held as well.

This language changed in the recent announcement on Wednesday. Graduation will now take place on June 6th as a drive-thru and virtual ceremony.

While the language of the update makes it pretty evident that the backup dates are gone, there still hasn’t been full clarity as to whether those dates remain in the picture anymore. Senior Joey Goodsir sent an originally-accidental “reply all” to this update, asking that very question. Yet even now, the Class of 2020 was left with very hushed mention of the backup dates being cancelled.

As a senior of LFHS who’s time in high school came to a rapid halt one Thursday in March, I feel no need to rush to end my year even sooner. Had the school board waited until August to decide to hold a drive-thru graduation, I would still feel robbed, but I would be able to make sense of the situation. Had the virus not gotten any better by then, to hold a drive-thru or virtual graduation before college would, to me, make sense.

What does not make sense to me, however, is deciding to have this type of ceremony act as a replacement when there are three months of summer where travels and plans have been thrown out the window, and two more possible backup dates to hold this event. This sudden decision feels rushed, lazy, and not something we, as a class, deserve.

Through every uncertainty we, as a class, have faced throughout our life, to have this be representative of our youth is not what should be accepted. We entered the world in wake of 9/11, have spent our school careers becoming desensitized to the unfair reality or school shootings,  and are leaving our youth behind within the wake of a global pandemic. We will never forget the memories we had in between those historical events, but the sentiment remains the same. We are incredibly strong, and to ‘cop-out’ this early is in no way representative of the Class of 2020’s moral strength and persistence.

I, for one, would be content waiting until Thanksgiving break to walk across that stage with chairs still 6 feet apart and a line circling the front lawn if I had to, but that is besides the point. Calling it this early is not in Scout nature. That is the issue here. We, as Scouts, do not give up. We do not call it quits early, and we stand up for what we believe in.  We do not back down unless it is the best and only option we are left with, and a drive-thru in June is simply not that.

I remember the fear and anxiety I felt walking out of the RMA and through the front hall being clapped in by my fellow Scouts. To not be clapped out during our last moment in blue and gold, is the one sacrifice I will not make.

Though I do not know the thoughts that went through the school boards’ minds when making this decision, and I trust they considered many options, this feels like calling a quits without getting a chance, and as seniors, we feel left behind.

As with any ceremony it is impossible to make the date work for every person involved or being honored. But with this decision disappointing seniors school-wide, the incentive to attend became drastically lower. Personally, driving up to the school on my own to receive a piece of paper does not seem enticing in the slightest. Attendance for this ceremony, and any ceremony here after, is uncertain. That should not be a driving force in the decision made to drastically move up this event.

If anything, having moments and events to look forward to right now is what is getting many of us through. Why cut off hope when there is no reason to? We need hope right now. We need reasons to stay home so we can go out later. We need incentives and motivations. Let graduation be that for us. Let seniors walk across a stage, let their loved ones cheer, let air horns blow and the choir sing, let them have their glory in blue and gold in front of the ivy. Do not call something this soon. Let it wait. If the circumstances require a drive-thru graduation in August, then so be it. But do not call this with possible dates as far into the future as the length of this shelter in place has been.

As a class, all we can ask now is for the backup dates for an in person ceremony with our loved ones in July and August to remain planned.

While a 16th birthday, drivers license, and 18th birthday are milestones in their own, a defining moment in someone’s youth is the great accomplishment of graduating High School. Regardless of their plans after that moment, it marks the end of a chapter and the beginning of a whole new way of life. To have a new beginning start like this, is simply not acceptable for me, and is nowhere close to what my peers and friends deserve. 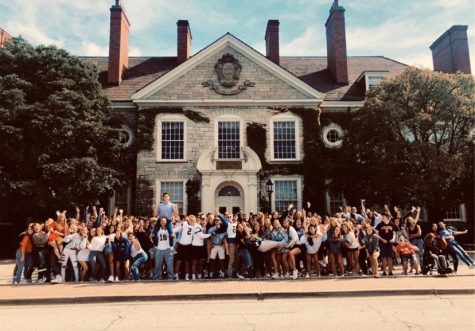