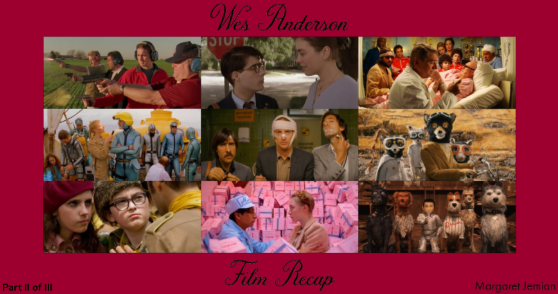 Please note that this is Part II of a three part series.

The following is the second part of a piece submitted by junior Margaret Jemian. Want to contribute to TFS yourself? Send an op-ed to [email protected]

The Life Aquatic with Steve Zissou (2004) 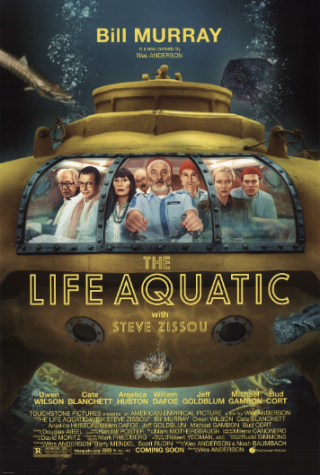 Embark on a voyage of discovery and avengement led by Steve Zissou (Bill Murray), an internationally renowned Oceanographer with a dedicated team made up of his estranged wife (Angelica Huston), a talented video production team of misfits (including Willem Dafoe and Waris Ahluwalia), an intern or two (because why not), and a man who may or may not be his son (Owen Wilson). Follow their story as they attempt to hunt down the shark that killed Steve’s best friend, but not without making a hit documentary along the way!

Well, this is most likely one of the strangest yet enjoyable films you will ever come across! The general idiosyncrasy expressed via the multitude of personalities, actions, and even underwater creatures is absolutely unprecedented. When watching this film, I felt like I was reading a book whilst watching a nature documentary, having been completely enveloped in the world of Steve Zissou and his life.

He is both an accomplished yet extremely troubled man, facing emotional, marital, and familial issues. Despite these major problems in his life, he continues to manage as a leader for his group and does, in fact, get them out of several binds, some of which may or may not include stolen equipment from Jeff Goldblum, exploding buildings, pirates threatening the interns’ lives (Captain Phillips’ style, while they are not Somalian), and/or a massive Jaguar shark.

Regarding the multitude of aquatic creatures featured in this film–most of which are fake, unfortunately– they are largely portrayed in the stop-motion format, which can now be seen as foreshadowing to his future work, two of his later films dawning this format. Additionally, his use of miniatures to represent large objects will stay with him throughout his filmography, helping him to presently embody the film’s ship, the Belafonte, as well as the exterior of the Grand Budapest Hotel in 2014.

Now, before I wrap up this review, I must address the elephant in the room: the Oceanographer Steve Zissou’s striking resemblance to the great explorer Jacques-Yves Cousteau. Quite frankly, this similarity was no mistake. Cousteau was somewhat of a childhood hero for Anderson, many details of Zissou’s life mirroring that of Cousteau’s, which I think is pretty cool!

Much like Zissou, his crew had red, knit hats and uniforms, and he piloted the Calypso, a real ship which had many of the same bells and whistles as the made up Belafonte.

When viewing this film, it truly did feel like an adventure filled with eccentric details and bizarre moments that don’t seem to belong. However, that awkward and strange feeling is one element that continues to bring me back to Anderson’s films and is one component that sets him apart from other filmmakers. 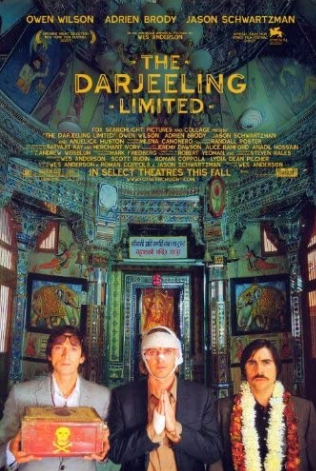 Note: this movie has a 13 minute precursing short film starring Jason Schwartzman and Natalie Portman, giving a small bit of background info on Schwartzman’s character, Jack Whitman, and listed as “Part 1 of The Darjeeling Limited.”

For anyone interested, the short film is titled Hotel Chevalier, which is where Jack’s characteristic yellow robe worn in the film is from, as well as the origin of Portman’s small cameo leading up to the closing credits. And now, back to the main attraction: The Darjeeling Limited.

On a quest for a greater understanding of each other, with an underlying hope of bonding, the three Whitman brothers take a trip to India and learn more about family than ever before. Their journey takes place a year after their father’s death and slowly unfolds as curious details about the excursion, the siblings’ past, and their future are revealed and realized through varying interactions along the way. Angelica Huston also plays their mother, so there’s that.

For some reason, I really seemed to connect with this film. It’s overall relatability and palpable characters truly allowed for this movie to stand out in Anderson’s filmography, despite it being one of the strangest and seemingly less notable. I, like many others, have a love-hate relationship with my older sibling, which is something that both repels and connects these brothers when they are together.

On their journey, the extensive and detailed effort put in by one of the brothers to plan the trip exposes the disheartened attitudes of the others, as well as some family history that separates them. However, as their trip continues, their relationship only gets stronger as each of their problems brings them closer together.

While all of Anderson’s films have oddities and strange ticks, this one especially protrudes from the bunch as the film that catches your eye in regards to his style. The atypical location of India for these brothers to take a vacation is as uncomfortable for them as it may be for the viewer, watching their formerly alienated relationship reblossom into something that nobody had thought possible.

Traditionally, when actors portray siblings in a film, it may be unrealistic and feel awkward for the viewer as personal details unfold before them. The performances of Owen Wilson, Adrien Brody, and Jason Schwartzman as the three brothers phenomenally complement the heartfelt storyline and allow the viewer to feel the familial tension brought to the table with a total sense of realism.

Watching a film that heightens all of your senses can be an immersive yet surreal experience, and that is just what this film brings to the table! 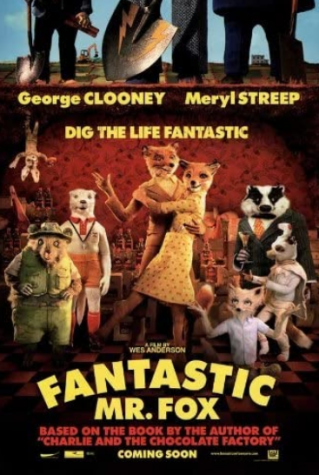 Based on the famed novel by Roald Dahl, the life of Mr. Fox is awoken once again, complete with new jokes, original characters, assiduously crafted stop-motion animation, and Willem Dafoe playing a somewhat hillbilly rat. I mean, what else could you ask for!

While the story may be a bit different from the original, this version provides a refreshing storyline with enough similar plot points to maintain the central outline. It’s different from the original, but just as exciting and nostalgic as Dahl’s is. No matter how many times I revisit the old book, I always seem to prefer the movie, most likely because it’s nice to get a fresh, new take on a classic story.

While it is based on Dahl’s novel, there are a couple things that make it incredibly unique. As previously mentioned, the film utilizes stop-motion animation to retell Mr. Fox’s tale (no pun intended). When many think of this animation style, claymation or Wallace and Gromit may come to mind, and while these stop-motion styles are distinct within themselves, I must point out that Anderson’s attention to detail is unparalleled. His ability to make a light breeze visible in the fur of a possum, weasel, fox, or angered farmer is miraculous and not only reflects patience, but dedication to this chosen artform.

Another thing that makes this film so unique is Anderson’s chosen style of voice-over recording. Dahl lived with his family in Great Missenden, a village in Buckinghamshire, UK, which is listed as being the inspiration for the story’s setting. He would always tell his children that Mr. Fox would live in a burrow underneath the tree, hence the inspiration.

When both writing and recording voice-overs for the novel’s film adaptation, Anderson returned to Dahl’s home, staying with his widow, Felicity (the name Anderson gives Mrs. Fox), and pulling details from Dahl’s home and lifestyle to incorporate into the film.

Many of the voice-overs were recorded around the home while the actors carried out what their characters were supposed to be doing in the scene (driving a motorcycle, running, etc). This method inflicts a sense of realism onto this animated favorite and truly makes it come alive even more than before!

No matter how old I get, this movie will be one of my all-time favorites, its timeless storyline and entertaining cast appealing to all audiences. As much as I adore it, though, I have a quick disclaimer: if you have not read the original book by Roald Dahl, then what the cuss are you waiting for? I can assure you, if you watch the movie, it will make more sense after you’ve read the cussing novel (as well as that reference)!