The Forest Scout • May 15, 2020 • https://theforestscout.com/26785/in-lfhs/lake-forest-music-students-promote-message-of-hope-to-a-broad-audience/ 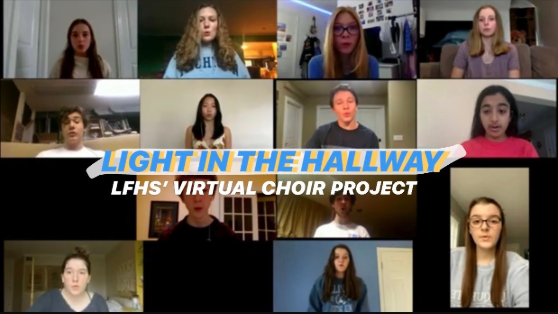 Haskett alerted his students to their sudden news appearances through a brief and unusual Schoology announcement:

“Suzanne Le Mignot from CBS News interviewed me this afternoon via Zoom;  she said the interview may be on tonight’s 10 PM news,” wrote Haskett, followed by the entirely unrelated,  “Stay healthy and happy!  We are almost to June!!”

The subject of Haskett’s interview pertained to his choir’s most recent performance: a rendition of Pentatonix’s haunting tune “Light in the Hallway”, recorded virtually and independently by each of the performers. The piece, first released by the a cappella group over four years ago, sends a poignant yet reassuring message of hope, or “light”, prevailing in times of darkness. Haskett felt that this subject matter was more than appropriate given the inherently devastating circumstances of the COVID-19 pandemic, yet he never anticipated the project receiving the amount of attention that it generated.

The director professed his gratitude to his students in another Schoology message following the release of the segment.

“I can’t tell you the amount of [positive reception] we are getting for our LFHS Choirs’ virtual project on ‘Light In The Hallway’”, wrote Haskett.  “I have received hundreds of emails from all parts of the country!  [On Youtube], we are currently at 2,700 views, and that’s just after posting it 2 days ago.  You have done some awesome work, and the community needed something positive!”

The CBS story featured select moments from the performance, awkwardly zooming in on a plethora of student faces throughout the two minute segment. Sophomore Alexander Panos happened to be one subject of this special attention, but his reaction to this sight was far from embarassed.

“My parents and I were literally screaming,” Panos said. “We couldn’t believe it. I thought, ‘if this is what it feels like to be a local celebrity, I should try and get on the news more often’.”

Although 111 students are ultimately featured throughout the virtual performance, CBS only showed a portion of the singers in their report. Nevertheless, viewers from the community took pleasure in knowing that their students were sharing a profound and powerful message beyond the North Shore.

Junior Mary Clayton felt “grateful to know that such a small act on her part contributed to a much larger movement”.

“It felt really cool to not only see the video, but to know that it has a purpose beyond performance,” Clayton said. “So many people reached out to me and my friends thanking us for being a part of it—people who I never thought cared about choral music in any way, shape, or form.”

The attention that “Light in the Hallway” received from CBS will certainly not be the last of it: WGN aired a shorter segment during their early Thursday morning news, and the video continues to circulate around Facebook, Twitter, and other social media platforms. While both Haskett and the choir deserve to have showcased their hard work for a physical audience, every like and comment demonstrates the impact their music has had on not only their community, but viewers in surrounding areas.

During these unprecedented times, it is difficult to rely solely on political figures and scientists to communicate the right answers—no one knows exactly what to say. Yet despite the uncertainty surrounding us, art remains, and while art may not hold the key to handling a global pandemic, it still holds inevitable truth.

“So count your blessing everyday

It makes the monsters go away

And everything will be okay

You are not alone

You are right at home.”