Scouts Finish Regular Season with Do or Die Game Against Patriots 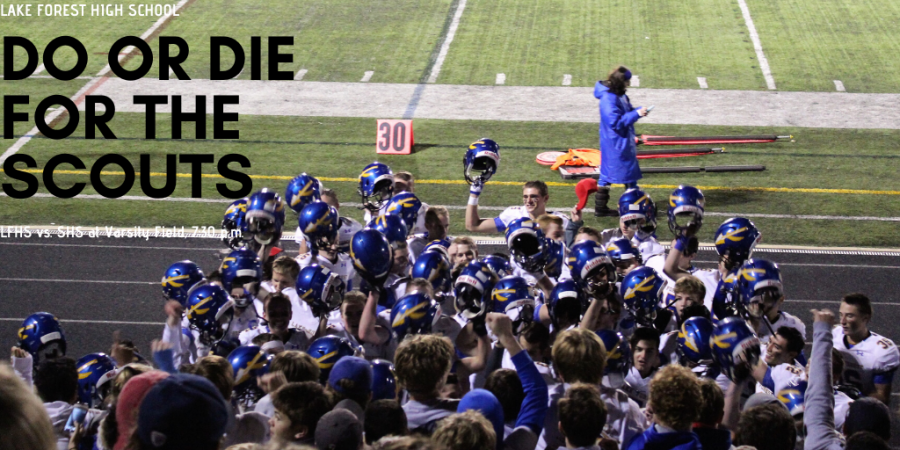 After a tough loss last Friday, the Scouts look towards a new test coming into town. It will be a team that in recent years is all too familiar: The green and gold from Lincolnshire, the Stevenson Patriots.

The Lake Forest vs. Stevenson game has never had so much meaning in the sport of football until now.

Both teams are 4-4 on the season, with both absolutely needing a win to make the playoffs. Whoever loses is spending the 2019 postseason at home on their couch.

Neither team wants this, especially at the hands of the other. Both of these teams do not like each other in the slightest. Last year’s game at Stevenson was physical, dramatic, meaningful, and in the end, the Boys in Blue left with an improbable victory, just the second win against the Patriots in Coach Chuck Spagnoli’s 16-year tenure at the helm of the Scouts. Now the opportunity to knock off the Patriots in back to back years is staring the Scouts right in the face.

Both of these teams are coming off of losses — the Scouts, a 23-10 loss at home to rival Libertyville, and Stevenson, with a home loss to the No. 3-in-the-state Warren Blue Devils, by a score of 37-0.

Five wins is the barrier of entry to the IHSA playoffs. This doesn’t guarantee a spot, but it gives you a good chance to be featured in the postseason bracket.

The past two seasons the Scouts have gotten in at 5-4, last year getting that fifth win against the Stevenson Patriots. On the other side, this is uncharted territory for Stevenson as they are used to getting in comfortably with records like 6-3 or 7-2. With some injury problems, the opportunity is there for Lake Forest.

For the seniors, this may be their final home game in their high school career, or their football career altogether.

This game needs to be controlled by the Scouts for 48 minutes. A fast start is crucial because the last two times the Scouts started slow at home they were beaten by Lake Zurich 39-7, and Libertyville just last week, 23-10.

The defense needs that performance that they put on against Antioch, they need those game-changing turnovers, which some of them they were able to get last week.

The offense must capitalize on these turnovers. Yes, this is all very simple stuff, but the Scouts need to have that mindset in order to have success on Friday night. Don’t try and overthink things, just play the game of football. Keep. It. Simple.

This game will be edge of your seat entertainment until the clock hits zero, whether that be in overtime or regulation. Each team will trade blows, each team will have their big plays, but the home-field advantage for the Scouts is going to be huge.

Varsity Field needs to be packed, every seat needs to be filled, everyone needs to be loud and support the Boys in Blue. This is all hands on deck, must-win territory.