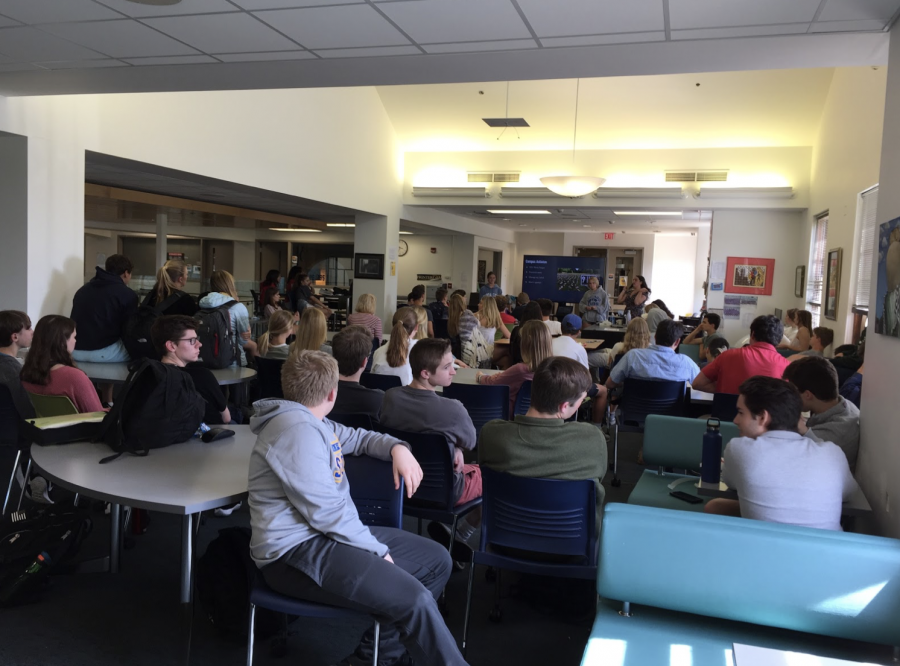 Alisa Gianelli, sophomore, and Grace Geschiedle and Julia Hender, juniors, lead attendees through a presentation about the club at its inaugural meeting on Tuesday, June 4. They discussed topics such as the nature of the club and possible events.

A group of conservative students formed the first political club in LFHS history, testing the waters in a school that has traditionally kept extracurriculars on a tight leash. The club held its first meeting on Tuesday, June 4 in the upper library and met with dramatic success; 70 students were in attendance, official records show.

The leaders of the club — which initially promoted itself as a chapter of Young Americans for Freedom, a conservative nonprofit, but is not recognized by that organization and is hence unable to use its name — cited providing a voice to conservative students as their principal aim.

“It’s really important… that we have a spot for our voice to be heard” throughout the school, sophomore Alisa Gianelli said. The club’s other leaders, juniors Grace Geschiedle and Julia Hender, agreed.

“A lot of people had similar views to us and felt underrepresented,” Geschiedle said.

Club leaders interpreted the large attendance as support for their claims and alleged that this large attendance stemmed from a bias in the classroom, even alleging that some students had been turned away by a fear of teacher reprisals.

“There are a lot of people who are like-minded in this group… in the classroom, only one side of the political spectrum is shown,” Hender said. “Kids were saying ‘I want to come to your meeting but I’m too afraid because I don’t want my teacher to hate me,’” she said.

Conservatives have historically been a powerful force on high school and college campuses, establishing several organizations such as Young Americans for Freedom and Turning Point USA even as the partisan rancor escalates nationwide. The new conservative club signals that this trend of partisanship may be coming for LFHS, too.

Several of the attendees, however, including junior Ryan Peters and sophomore Grant Huebner, attended on strictly nonpartisan grounds.

Peters attended “to celebrate our freedoms as Americans,” he said.

“I think for a democracy to function, it’s essential for people to know what’s going on,” Huebner said.

Informing the public will constitute a large part of the club’s mission, especially as the 2020 election approaches.

“With the 2020 election coming up, it’s often voiced that there’s only one right way to vote and that’s just not the case,” Hender said.

Some students expressed concern that an explicitly conservative club might further divide the student body and that its additional focus on informing the student body might conflict with long-established organizations such as Model United Nations and Debate.

“I was just wondering why a conservative club is necessary when there are already clubs like Model UN and Debate and it only causes a political divide in the student body,” said junior Jack Lavanway.

Hender sought to reassure concerned students and cast the club in a more neutral light.

“There shouldn’t be any preconceived notion for any group,” Hender said. “In order to talk about one side of politics you have to talk about the other.”

Several more conservative students criticized this tack toward the center and called upon the club to move further to the right, in line with the national Young Americans for Freedom organization.

“We want to see more of a stronger support of conservative ideals,” said a student who asked to remain anonymous. “I’m a little concerned about their reluctance to give themselves a specific branding… it’s a little too close to Debate Team without a specific leaning,” said another student who also spoke on the condition of anonymity.

On the particular issue of providing an environment for political expression, however, the club found near-universal support — including from junior Kelsey Marx, who is planning to launch an LFHS chapter of the High School Democrats of America pending final approval. She had earlier played a prominent role in organizing the New Voters Club.

“Students should be free to organize as they wish, and I view partisan clubs as a vehicle for overall political engagement among young people,” Marx said. “The problem at LFHS was that there was no set outlet for any political view whatsoever, and I’m delighted to see this finally being addressed.”

The recent developments come after several years where successive variants on the theme of a conservative club were rejected by the school administration, according to various sources within and outside of the newest iteration.

“The club that was initially proposed didn’t align with our school’s values,” Student Activities Director Ashleigh Malec said. “We are an inclusive space, we’re open to student voice, creating an environment of acceptance and respect… there were several different conflicts, from my understanding, that caused them not to be approved.”

At the same time, the school is restricted from supporting religious or political student organizations such as the Fellowship of Christian Athletes or the new conservative club. Faculty supervisors cannot in any way help manage such organizations; “they are just there to make sure that… the students are truly supervised in a space, that they’re not just in a classroom alone,” Ms. Malec said. “They are truly student-driven, so that lends some kind of autonomy to them,” she said.

The administration additionally faces the challenge of balancing various student interests at the school. “Political and religious groups,” Ms. Malec said, “can exist as long as they don’t take space from other organizations that exist here.”

In this particular case, the administration and Ms. Malec — who Marx described as having “done a fantastic job in supporting all student endeavors” — approved the conservative club in the form of a pilot program, which will run for “about a year to see how it goes, basically, to see if it takes off,” Ms. Malec said. “Sometimes they fizzle out.”

Assuming all goes well, the conservative club will be joined in this pilot program by HSDA, heralding a brave new world of youth political involvement at Lake Forest High School and across the country and across the warming world.

“I can’t wait to see what this generation will accomplish,” Marx said.

An earlier version of this article referred to Young Americans for Freedom as a partisan club; this was a factual error that has since been corrected. The chapter has since been recognized by its parent.