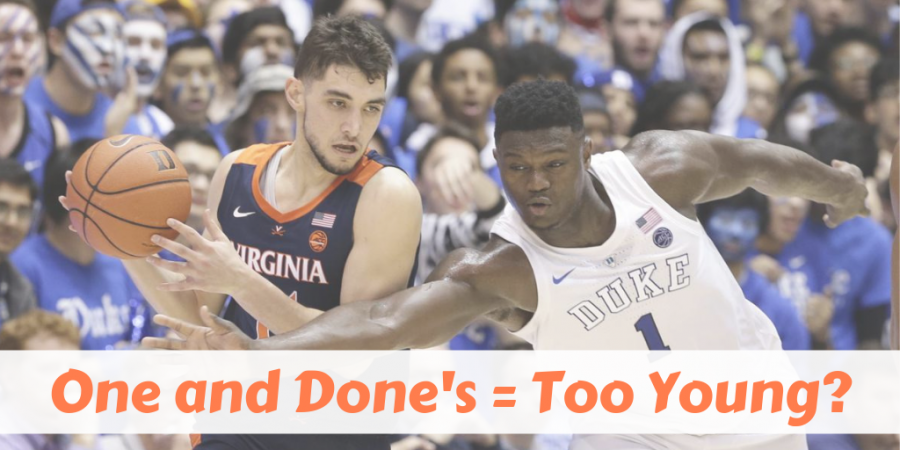 Zion Williamson has been at the center of the sports world this winter, delivering one monster dunk after another in the biggest games all year. Except he was absent this weekend, and will be tonight as well. R.J. Barrett was also likely living like a typical college student on Saturday, same goes for Nassir Little, Romeo Langford, and the rest of the McDonald’s All Americans or the projected “one and done’s.” Instead, Cassius Winston, Kyle Guy, and other upperclassmen captured the spotlight on Saturday, teaching a lesson or two to their freshmen counterparts.

The 2018-2019 college basketball season proved to be another example during this ever changing hoops setting that leadership and experience outweighs young talent. While guys like Williamson, Trae Young, and Karl-Anthony Towns have all been at the forefront of the media at one point, they never competed in the national championship game.

Aaron Henry on the other hand, Michigan State’s freshman forward, was a three star recruit and is still likely unheard of by most. However, Henry’s 5.9 ppg lead all freshman in scoring among teams that made the final four. That number is not high when comparing with other freshmen across the country, although Henry serves an indispensable role on Tom Izzo’s eighth final four team. He’s their lockdown defender, he’s the teenager who guarded Barrett in the matchup with Duke, he’s the guy that stepped up with 20 points, 8 rebounds, and 6 assists against LSU, and he’s the player that went viral for getting ripped apart by Izzo. He was a key to the Spartans this year, and will be again in 3 years when he’s the next senior leading this team to the final four.

We all saw Texas Tech knockout those Spartans on Saturday by playing a beautiful and meticulous style. The Red Raiders were led in scoring by fifth year senior Matt Mooney, who drilled big shot after big shot, and sophomore Jarrett Culver, a projected top ten NBA draft pick that came up clutch towards the end. Chris Beard’s team didn’t rely on one freshman to lead his team during their first NCAA tournament; instead, Beard’s team played a “together” brand of basketball to slow down the Spartans and reach the school’s first ever national championship.

Scrolling down Auburn’s roster, you’ll instantly notice the repetitive “senior” or “junior,” next to the player’s name. Or vice versa, for their elite eight opponent Kentucky, the opposite could be said. Freshmen and sophomores dominated that roster and could ultimately be a reason why the Wildcats knocked off Auburn in both regular season matchups; but when the season was on the line, junior Jared Harper and senior Bryce Brown stepped up for the Tigers and made the saying “third time’s the charm” ring true.

Tony Bennett’s exceptional career had long been defined by his tournament failures, and even though Virginia had three ACC regular season titles in his tenure, their loss in 2018 to #16 seeded UMBC left many fans across the country skeptical. The Cavaliers’ 2019 season quickly quieted those doubters. Led by three year members Ty Jerome, Kyle Guy, and DeAndre Hunter, Virginia will be playing for a national championship tonight and also won Bennett’s fourth ACC regular season title since 2009. Oh and Guy, the exceptional junior, was the one who calmly nailed all three free throws during the final seconds to send the Cavaliers to the championship.

While some may argue that Coach Krzyzewski’s 2015 Duke team was an example against this thought, but that Blue Devil team was led by senior and All-ACC point guard, Quinn Cook. Cook is the type of player that this year’s Duke team was missing. The same goes for the 2012 Kentucky Wildcats; sophomores Doron Lamb and Terrance Jones were both starters who provided much needed experience to a crazy-talented young squad.

As the NBA draftees seem younger and younger, and blue blood teams recruit more and more freshmen, one common theme has held true. In order to win in March and April, when it matters most, teams will need experience to step up. And for teams with 18 year olds that social media adores, well, our media will need some different content during final four weekend.