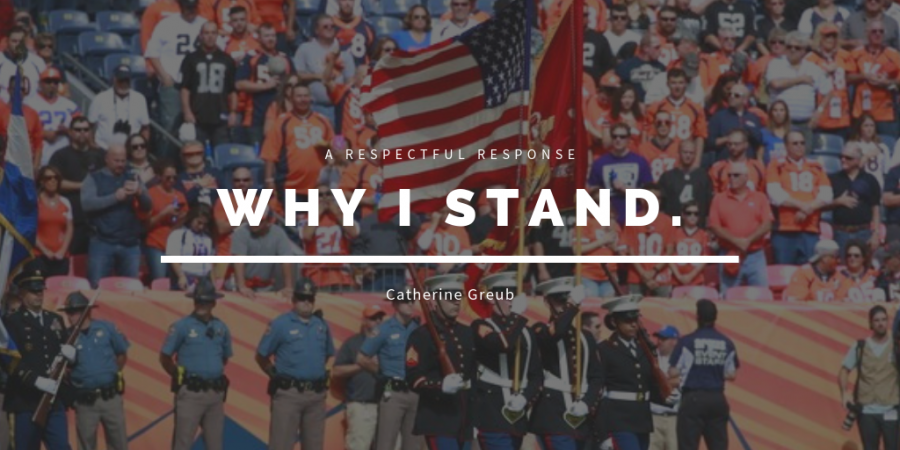 This article is not intended to offend anyone; it is only to express my feelings and urge to stand up for what I believe in as a free citizen of the United States of America. We live in America the great, where we have democracy, freedom, and the ability to share our viewpoints.

Recently, there has been a huge uproar between the NFL and activists who have been taking a knee during the national anthem. Besides the Colin Kaepernick controversy, there have been plenty of talk among America as a whole, the activists who want to make a change, and the artists that sacrificed their halftime show opportunity. There have been many open letters written to Kaepernick from veterans, active members of the US Armed Forces, and priests of different denominations and normal American citizens as well as past professional football players. I did my research to dig deeper to see what Kaepernick really stands for and what the point is that the letters are trying to get across. The overall goal of Kaepernick: stop oppression of black people and people of color in America. The goal of the open letters: explain why Kaepernick (and supporters) should still stand and not disrespect the flag alongside agreeing with the goal of stopping oppression.

This conflict has opened many new conversations, including the hashtag, #ImWithKap where artists and influencers with African American heritage are supporting. When the NFL asked these artists to perform at the halftime show, many declined. Rapper Cardi B rejected the offer by saying, “I got to sacrifice a lot of money to perform. But there’s a man who sacrificed his job for us, so we got to stand behind him.” and Rihanna declined as well as made a public post to Instagram calling views of the Superbowl this year “weirdos.” Kaepernick thanked both artists for their support and sacrifice.

While I completely agree that America needs to stop oppression of humans no matter the color of skin, I do not believe this is something for which to disrespect the flag and our great nation. I was raised in a family where my grandfather was in World War ll and was 101st Airborne as well as a D-Day aviator. He was a proud American, raised by Germans who came to America for new opportunity and the American Dream. My grandfather survived the war and became a father to my mother Mary and Uncle Tiger. The way they were raised is similar to my way of being raised. The rules were simple: stand for the flag (especially the first flag in the 4th of July Parade), respect and honor the men and women who fought and are still fighting for this country, and always be kind to others. I stand for the flag for many reasons, but I found a very interesting way others look at it. I found an article about the five reasons we stand for the flag. 1. We stand for the flag today, not to please ourselves but to honor those who paid the ultimate sacrifice for our freedom. Therefore, I thank and respect the men and women of our nation. 2. We stand for the flag not to focus on what divides us but on what unites us, which is being an American. Oppression is something that needs to be changed and stopped, but we are America, the great nation. 3. We stand for the flag not to pledge allegiance to a president, but to honor the reality that we have an elected president and not a lifetime king. With politics being one of the hot topics and drastic differences between democrats and republicans we should be thankful we live in a democracy no matter what party we support.  4. We stand not because of past or present pain caused by injustice, but to salute the principle of justice. With Kaepernick taking a knee, it started a divided line within our nation. We have come to far from our past history and are still growing to divide us once again.  5. We stand for the flag not for our generation but to set an example for the next generation. Do you want our next generation to grow up in a divided nation with lack of respect for how far we have come? Or do you want the next generation to be proud of the changes we have made?

The article that I read last week made me ponder the whole controversy. Written by an Antiochian Orthodox Priest, he explained this, “There are really only two ways to go from where we find ourselves today in our country: we can continue to operate on opposite sides of racial, economic and political divisions. We can yell louder and louder and listen less and less, and grow the scandal we cause each other. Or, we can do the opposite. We can make our first priority to NOT scandalize each other, but instead to listen and understand. We have real disagreements, and if we’re going to resolve them it will require all of us to see things we didn’t want to see, and to exchange the lies we’ve accepted as truths for the truths we called lies.” I found myself moved by this profound letter, but my favorite part was this, “I know it may sound crazy, but hear me out. What if you said that your intention was never to scandalize anyone and since many people are obviously scandalized, you are calling for an end to the kneeling during the National Anthem?… So what would happen if you said you want everyone involved in the protest to stand with the people who have been scandalized by the protests and stand in honor of our country? Invite everyone to join you in reversing the tide of division born of disrespect, and derision, and to replace them with unity, grown from mutual respect and understanding.” I hope this is something that Kaepernick can do with pride as he once wrote, “God Bless Our Troops” on a football that was going for auction in a charity for men and women of war.

Overall, in my opinion, this Colin Kaepernick controversy was blown way out of proportion. I am sorry he lost his job for a problem he believes in, but I lost my respect for him by not standing for America. I want him to continue his fight to change America, but only will support him if he takes the time to acknowledge the great nation we live in, as well as taking his problems directly to the NFL. In addition, the NFL tried to make up for their wrongs by inviting Civil Rights activist Andrew Young, John Lewis and Martin Luther King Jr.’s daughter, Bernice King, to the coin toss at the Super Bowl earlier in February. Recently, at a Chicago Bulls basketball game I attended, all the people in the crowd stood proudly with their hats off and hands on their hearts. While the Bulls celebrated Chinese New Year and gave the honor to a Chinese man to sing the national anthem, by the end, I found myself with chills and the great joy of living in this country. I hope that we don’t take that for granted on an everyday basis. It hurts me when I find myself and five other students, out of the 22 in my first period class, who do not stand for the pledge in the morning. I understand our public school cannot force us, but we should want to honor the ability to say that pledge daily. Lastly, I was given the opportunity to travel abroad to Thailand to visit my father. Once I came back and landed on America’s soil, I was beyond happy and fortunate to live in this country. As I got to experience, in a small dose, what a military regime is all about, seeing the different worlds out there made me appreciate living in a democratic and free nation. America is truly the land of the free!

Please remember this is only my opinion and all people have their own rights to their personal thoughts and beliefs. Just one last thing, God Bless America.