Together Through Laughs and Literary Discussion

The Story of Ms. Eccleston and Mr. Ferges 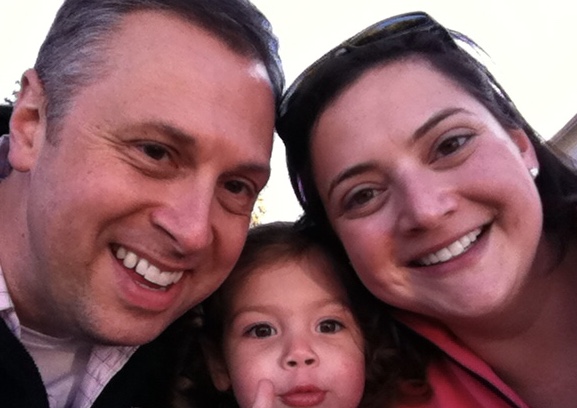 Ms. Jane Eccleston was invited to Ravinia by her future department chair to join a group of English teachers from the school she would teach at that coming fall.  There she met a first-year teacher named Mr. Lance Ferges, whom she connected with almost immediately.

After the concert, he helped her find her car amid the sea of people. He even carried her lawn chair.

18 years later, Ms. Eccleston is in her 19th year of teaching English at Lake Forest High School, her husband, Mr. Ferges, in his 20th. Their daughter Brin is about to turn 9.  Their 14th wedding anniversary is later this fall.

The husband and wife duo teach myriad English classes with students ranging from freshman to senior, and they even share a curriculum teaching AP Literature and Composition.

“There have been kids that I’ve had as freshmen; it will take them a while, maybe even a couple of years to realize that we’re married,” said Mr. Ferges. “What’s funny is we don’t have the same last name.”

Although they have the same job, it doesn’t necessarily mean that they are the same schedules.  “There are years when we have completely opposite schedules, there was even a year where we couldn’t have lunch,” Ferges said.

Beyond that, the experience of working together is majorly positive.

“It’s really incredible to just be able to always live our lives together,” Ferges commented.  “A lot of people look at that and think ‘That is scary,’ but it’s all we’ve ever known.”

“We laugh a lot,” Eccleston said. “We don’t do anything super weird or exciting, but we do laugh a lot.”

“We just enjoy laughing, and we do have all the same likes,” Ferges added.

Mr. Ferges admitted that he hates flying “with a passion.”

“When we were flying down to see his parents, there was like a small drop,” Eccleston said. “He described it as the plane dropped hundreds of feet out of the sky.”

“It was thousands of feet–it was horrible, it was awful,” Ferges added, laughing.  “I grabbed the seat and screamed ‘Jesus Christ, oh my god we’re gonna die! I screamed it to the whole plane, and the flight attendant gave me a sideways glance saying ‘Calm down, mister…’”

Outside of school, the couple doesn’t often discuss work.  When they do, however, it’s about–well, what else?

“Sometimes we actually do talk about books,” Eccleston said. “There will be times where we’re teaching the same thing, and we’ll talk about how a discussion went, and sometimes how ‘someone said this thing that I’d never thought about before…’”

Their daughter, eight-year-old Brin, is their joy.  An avid reader at home and at school, Eccleston and Ferges are “trying to make her a full on nerd.”

“Some of the best times will just be the three of us binging a TV show,” said Eccleston, citing Netflix’s A Series of Unfortunate Events as a family favorite.  Brin is also a budding musician, playing cello, as well as a swimmer.

“I will sit and watch her swim,” Ferges said. “That’s my exercise.”

There are a lot of things they love about each other, so it was hard to pick just one.

“Hands down, he makes me laugh, all the time,” Eccleston said. “It’s real, I’m not faking it.”

“She’s so smart that we have these really great conversations that I can’t talk to anyone else about,” Ferges added.

Above everything, Eccleston summed up that she was always “looking for intelligence and a sense of humor.”

And as always, the couple laughed.