Social media is feeding your insecurities 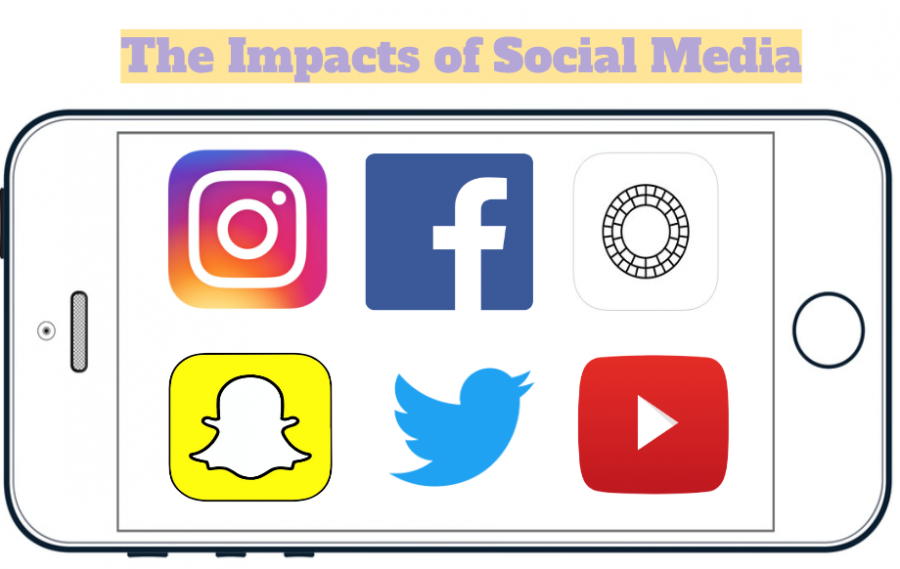 Social Media is consuming us. Every student in the hall is glued to her phone. During class, notifications are constantly buzzing, beeping, and popping up, distracting students from learning.

We are more concerned with what’s on happening on online than for our test tomorrow. Whether it’s a Snapchat from your best friend or a comment on your latest Instagram post from someone you barely know, we are addicted.

A shocking 92 percent of teens report going online daily and 24 percent say they are online almost constantly. That’s a lot of screen time. And it’s making us less happy.

A Huffington Post poll found that 60 percent of people using social media reported that it has impacted their self-esteem in a negative way. They also found that 51 percent say social media has made them feel more self-conscious about their appearance.

We are so used to seeing our friends edited lives online, even our own lives. We start to believe that those lives are perfect, amazing and full of talent, while ours are just…not the same.

Are people really going to post the worst picture of themselves for everyone to see online? Of course not. That one “perfect” picture was probably taken 20 or more times, and only the best one was posted.

Every picture is filtered, edited, and fixed to make it look aesthetically pleasing. It’s a non-stop cycle. Let’s all be honest, not everyday is filled with great food, sunshine, and fun events.

“Your body, acne, or any flaw can be fixed. These photos are taken a million times over and lead to girls comparing themselves,” sophomore Mary McKendry said.

Not only does it allow everyone to hide their flaws behind the screen, it is also turned into a competition between people online. Only wanting to satisfy our followers, it becomes our main objective to keep up the facade and post pictures we think others want to see.

It has almost become a game, commenting on people’s pictures hoping that they will comment on yours in return. Although these are just numbers on your post, the lack of comments and likes you receive slowly start to get in the way of your self-confidence.

“It teaches people to be more vain. It makes you be predisposed to judge someone based on their number of likes or comments,” senior Kenleigh Theis said.

A trend that is slowly starting to arise in the social media world is removing the ability to comment on Instagram photos. This means that no one can leave comments, the only thing you can see is the caption.

Senior Mary Bail turned off commenting on her Instagram photos, “I decided to disable comments on my pictures because it caused me to worry and obsess over other people’s opinions of me,” Bail said. “Now that they are off, it makes me feel ‘free’ from the norms of social media and I feel I can post what I want.”

Traveling, relationships, social life, fitspiration, food, luxury items… Who doesn’t want to live that lifestyle? This is where people get stuck, sitting there wondering why their life can’t be like everyone else’s.

The problem is that it’s not realistic and it’s all superficial. Gail Moesta who has been working here for ten years, attests to how social media has shaped teenagers over the years.

“Kids are more into their devices than talking. Kids are still talking, but not like they used to. How they communicate, more electronically then verbally,” Moesta said. “Everything is so instantaneous and everyone is so aware, social media makes things feel so all inclusive, but that’s not the way the world works. It intensifies the ‘I feel left out’ aspect.”

Social media presents things in a way that makes them unattainable. Whether it be body image, food, lifestyle or events, their online image is more flattering than the reality.

What often gets lost in the process is that everyone has different stories behind their pictures, all kinds of strengths and weaknesses. Everyone struggles with sadness, loneliness, and many other emotions.

When feeling trapped in the world of social media, there are a few things we can do: take a break, avoid it, and get off the device.

We are all human. Everyone is bound to have their moments, we just don’t see it online.

No matter how perfect their live looks online, remember that they’re regular people behind the screen, just like you.

Katie Stovold contributed to this story.